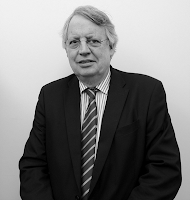 Ivan Head is an Anglican priest and poet, who was born near Perth, Australia. His poems frequently appear in the influential magazine, Quadrant, which is edited by Les Murray. Ivan Head left Australia in the early ‘80s to earn a PhD in New Testament Language and Literature, from Scotland’s Glasgow University. Since 1995 he has served as the Warden of St. Paul’s College at the University of Sydney.

His first collection, The Projectionist, was thirty years in the making, and appeared from Palliser Publishing in 2004. The following is the final poem in the collection. The second poem is one of Ivan Head’s newest poems, and has not been previously published.

I found by chance
in Job's lament
a pressed flower;
a browned Poppy,

thinner than a wafer
but recognizable.
It possibly
pre-dates Cromwell.

Whose hand placed it there?
Tomorrow I shall turn
to the Song of Songs
and look for time's pressed Rose.

Dash 8 from Armidale:
Not Angle Grinders but Angel Grinders

At nineteen thousand feet
The propeller is 2 metres of
Continuous diaphanous blade,
A thin curtain of spin slicing the air,

There’s a blur at the tip where
Contrary paint hints at a solid
fugal edge, the fleeing, flight edge.
It would not warn a bird.

Held by the engineered centre
By its core and cone.
This centre can hold,
This gyre not fly off.

The propeller lives by refinement
And human purposes.
They are not replaced by the jet.
While it looks like nothing’s there