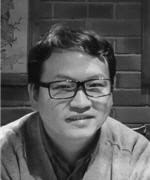 Li Hao is a Beijing poet born in 1984. He is the winner of the Yulong Poetry Prize (2008) and the Beijing University Weiming Lake Poetry Prize (2007). Eleanor Goodman wrote in Words Without Borders, “He must toe a line as a younger poet living in Beijing and working for an official literary publication, careful to keep his verse free of material that might be considered proselytizing. Nevertheless, his first [officially] published collection, The Tempest, was banned [in China] and pulled from shelves not long after its publication.”

His poetry, besides having been translated into English, has been translated in Polish and various Asian languages. He is the author of two collections Returning Home, and The Tempest, as well as a mixed collection of poetry and essays, You and I. He also self-published an earlier poetry book in 2007, The Ladder of Deconstruction.

The following poem, translated by Eleanor Goodman, first appeared in Unfamiliar Riverbank: Contemporary Chinese Verse. It was described as “A poem about suffering and the Divine”.

I Want to Walk Toward the Altar of the Lord

the vault of heaven’s many
gears: corpulent

Leviathan of my soul,
covered in knifepoints, making the heavens

Lord, I am foolish,
I am suffering, and my body,

like a spoon, here on this earth, sweetly scoops out
my brain.