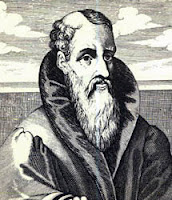 Boethius (c.480—c.526) is a philosopher who was born into an aristocratic family in Rome. He became known for his theological tracts, and for his poetic work, The Consolation of Philosophy, which he wrote while imprisoned. He was also known as an Aristotle scholar, and for his theories on mathematics and music. The Consolation of Philosophy became one of the most popular and influential philosophical works of the Middle Ages. According to The Catholic Encyclopedia, "The main argument of the discourse is the transitoriness and unreality of all earthly greatness and the superior desirability of the things of the mind."

Eventually Boethius was executed by King Theodoric the Great who thought he was conspiring against him with the Eastern Roman Empire.

Margaret Avison, in her 1993 Pascal Lectures at the University of Waterloo, quoted Boethius as saying, "Eternity, then, is clearly a property of the mind of God. God ought not to be considered as older than the created world in the extent of time, but rather in the immediacy of his nature."

The following passage was translated by David R. Stavitt.

from The Consolation of Philosophy

What strife breaks the civil bonds
of the things of this world? What God would set
such incompatible truths loose
to struggle thus with one another?
Either could stand alone, but together
how can their contradictions be joined?
Or is there some way that they can get on
that the human mind, enmeshed in flesh,
cannot discern? The flame is covered,
and in the darkness the world's subtle
connections are hidden. And yet we feel
the warmth of the love that holds together
all that there is in eternal truth
that knows what it seeks and has its end
in its beginning. But which of us yearns
to learn those things he already knows?
And is that wisdom or is it blindness?
(And how do we know that we not know
what we do not know?) If it were found,
could the ignorant seeker recognize it?
From our minds to the mind of God
is an awesome leap: the infinite number
of separate truths that are yet all one
leave us breathless. The body's dense
flesh obscures our recollection
of the separate truths and the one truth
and yet allows us at least to suspect
that we all live in an awkward state
with inklings of our ignorance
that turn out to be our greatest wisdom—
as if we had long ago ascended
and beheld from on high the exalted vision
of which we now retain nothing
but the sense of loss of that exaltation. 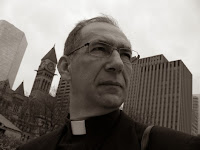 Sir Philip Sidney (1554—1586) may be considered the father of English literary criticism. In his "The Defence of Poesy", Sidney argued that poetry, by which he meant literature, was able to rouse its readers to virtue. Although this is not the intent of many writers today, this was Sidney's focus and purpose. In 1583 he began his project of versifying the Psalms, which was interrupted by his death. His sister, Mary Sidney Herbert, completed the project in 1599.

He was involved politically in the cause of uniting Protestant Europe against the Roman Catholics of Spain. In 1581 he became a member of parliament, and in 1584 Queen Elizabeth I appointed him governor of Flushing (in the Netherlands). In fighting against the Spanish at the Battle of Zutphen, a musket-shot broke his thighbone; twenty three days later he died.

Clothed with state, and girt with might,
Monarch-like Jehovah reigns,
He who earth's foundation pight—
Pight at first, and yet sustains;
He whose stable throne disdains
Motions shock and age's flight;
He who endless one remains
One, the same, in changeless plight.

Rivers,—yea though the rivers roar,
Roaring though sea-billows rise,
Vex the deep, and break the shore,—
Stronger art thou, Lord of skies!
Firm and true thy promise lies
Now and still as heretofore:
Holy worship never dies
In thy house where we adore.

Brad Davis is the author of two full-length poetry collections, Opening King David, and his new book, Still Working It Out. He is a counselor and poetry writing teacher at the Promfret School in Connecticut. His poetry has appeared in such journals as Image, The Paris Review, Poetry and Spiritus. I have been very fortunate to have edited Still Working It Out with Brad for the Poiema Poetry Series from Cascade Books.

Poet Margaret Gibson has said of this book, "Brad Davis has mastered the art of presenting the ordinary moment with all its stunning strangeness. Reading these poems, we become mindful that we live by mystery, by beauty, and by grace."

The following is the title poem from his new collection:

Still Working It Out

for Robin Needham, killed in the 2004 Christmas tsunami

Something
shuddered in the un-

fathomable dark, and a wave
shouldered forth

into oncoming traffic—a wave
inhering by the power

of a word lovely
as snow on a navy sleeve,

the same word
that shuddered in each

dark cell of the dead
Christ, a wave shouldering forth

the old, the impossible—a wave,
a word, terrible as it is

great, great as it is holy
and terrible.