Francis Quarles (1592–1644) was a popular poet with the common people of his time, even though he was not one of them. In 1613 Quarles was appointed cupbearer to Princess Elizabeth — the daughter of James I — and was part of the contingent that travelled to Heidelburg for her marriage. Despite these connections and the various appointments he was given, he and his wife were often poor; they had eighteen children.

He is best-known for his Emblems (1635) which consist of meditative verse, matched with scripture, and elaborate illustrations. It is the didactic, moralizing of this book, and of much of his other religious poetry, that appealed to the puritans. This same quality marginalised his work in the following centuries.

He was a supporter of the royalist side during the Civil War. After 1637 he turned his attention to writing political pamphlets. In 1644 parliamentarians had his house searched for “subversive” materials, and his manuscripts were burned. His popularity with the puritans protected him from personal attack.

The American poet Langston Hughes is one of his descendants.

Close now thine eyes and rest secure;
Thy soul is safe enough, thy body sure;
He that loves thee, He that keeps
And guards thee, never slumbers, never sleeps.
The smiling conscience in a sleeping breast
Has only peace, has only rest;
The music and the mirth of kings
Are all but very discords, when she sings;
Then close thine eyes and rest secure;
No sleep so sweet as thine, no rest so sure.

Marilyn Nelson is a Lutheran poet whose collections have, three times, been finalists for the National Book Award — including The Fields of Praise: New and Selected Poems (1997). She served as poet laureate of Connecticut from 2001 to 2006. In a recent interview with Jeanne Murray Walker for Image, she said that some of those who most influenced her early writing were the Harlem Renaissance poets, such as Countee Cullen and Langston Hughes, and other African American poets.

She is also known as a children's book author; at first, some of her adult poetry was published as books for younger readers — including Carver: A Life in Poems, a spiritual biography of George Washington Carver (2001), and Fortune's Bones (2004). She has now also intentionally written books for children.

The following poems are from her collection, Magnificat (1994).

So many cars have driven past me
without a head-on collision.
I started counting them today:
there were a hundred and nine
on the way to the grocery,
a hundred and two on the way back home.
I got my license
when I was seventeen.
I’ve driven across country
at least twelve times;
I even drive
late Saturday nights.
I shall not want.

John Milton (1608—1674) in his great epic Paradise Lost presents the story of creation and the fall, using his sanctified imagination, yet carefully seeks to keep his tale true to scripture. His expansions on the biblical narrative help us to imagine what it might have been like, especially since the human reactions in Milton’s version ring so true.

When I read Paradise Lost last summer, I just had to read the following section aloud to my wife. It is a wonderfully romantic passage describing Adam’s experience of seeing Eve for the first time. Milton describes the scene as though the man is conscious of what God is doing when removing his rib, healing the wound, and fashioning something nearby with his hands. The account continues:

Under his forming hands a creature grew,
Man-like, but different sex; so lovely fair,
That what seemed fair in all the world, seemed now
Mean, or in her summed up, in her contained
And in her looks; which from that time infused
Sweetness into my heart, unfelt before,
And into all things from her air inspired
The spirit of love and amorous delight.
She disappeared, and left me dark; I waked
To find her, or for ever to deplore
Her loss, and other pleasures all abjure:
When out of hope, behold her, not far off,
Such as I saw her in my dream, adorned
With what all Earth or Heaven could bestow
To make her amiable: On she came,
Led by her heavenly Maker, though unseen,
And guided by his voice; nor uninformed
Of nuptial sanctity, and marriage rites:
Grace was in all her steps, Heaven in her eye,
In every gesture dignity and love. 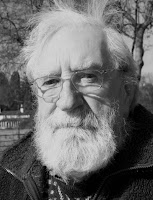