Kenneth Leslie (1892—1974) is a Canadian poet, clergyman and political activist. In the 1920s he was part of a literary society in Halifax called The Song Fishermen which included Charles G.D. Roberts and Bliss Carmen. After this he, and his first wife, moved to New York. His first collection, Windward Rock (Macmillan, 1934), received positive attention on both sides of the Atlantic, and his fourth book, By Stubborn Stars (Ryerson,1938) won him the Governor General's Award.

Although he was not a communist, he was given the nickname "God's Red Poet" due to his political activism. In the late 1930s he worked steadily against fascism and anti-semitism. He founded the influential journal The Protestant Digest, which earned him many friends and many enemies. The magazine's editorial advisers eventually included Paul Tillich and Reinhold Niebuhr. Rather than face the House Un-American Activities Committee, Kenneth Leslie returned home to the Annapolis Valley in Nova Scotia.

In 2010, The Porcupine's Quill published The Essential Kenneth Leslie.

Constrained to call and cry the wares of God,
you stumble in the pulpit, troubled, dumb,
suddenly striken, silent as a clod,
no whispered word, not even a breath will come.
What strange antagonist takes strangle hold
upon your spirit's tendons till they bend
to breaking, and yet leaves your spirit bold
to claim a victor's blessing at the end?
There! He has gone, and going swings a gate
for swift release. Your throat, a golden flume,
the flowing torrent of a soul in spate,
mad with hwyl of spirit, fills the room.
Now we can guess the pain, the silent cry,
and whose hand struck the hollow of your thigh.

Jesus thought long
on an oar thinned to breaking.
It was flesh in His hands
of hard toil partaking.
Jesus found beauty
in the curl of a shaving
And truth in a yoke
worn out and past saving. 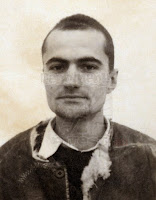 Sergiu Mandinescu (1926—1964) is a Romanian poet who spent fourteen years of his brief life in a communist prison. While incarcerated, he was not permitted to have either pen or paper — sometimes living in solitary confinement — and so, Mandinescu had to memorize his poems as he wrote them. Whenever he shared a cell with other prisoners he was able to recite his poetry to them, but had to be careful of watchful guards and informers. Much of his poetry was lost, due to the continual mistreatment he faced from communist authorities.

Like many Romanian political prisoners, Mandinescu was able to turn to his Orthodox Christian faith, which helped him to survive. It is not surprising, then, that the following poem, is in the form of a prayer.

If I only had an angel’s quill
and the dark ink of night
perhaps only then I might
gather from all my vagaries
to write my memories
telling why I’m bleeding, I will.
Plundered stars of the night.
At the window of Hope — irons tight.
At the door of Salvation — the lock.
Our pale face, asleep on the block.
As the hatred breaks out, all its dark flame will sweep
in a split second, the fire will wring
our mind, soul and wing,
our ashes piled high, in a heap.
When the terrible hammers will shatter the silence
to pieces, as great as the penance,
our broken-up souls will be reaching the sky,
as the martyrs will burn on the pyre, up high.
Such a terrible grief and the beatings of kind
caused so many inmates to have shattered their mind
as a great many more for eternity strive
from the ones who’ve been there, just the dead are alive.
Just like him and like you, I am only a bloke:
see, My Lord? I do walk and I talk
as a true living corpse my existence is bare
I am ready, My Lord, to be taken up there.
I embrace all the pain and the anguish I merit
as I wait to be called by the heralds of Heaven
in the name of the Father, the Son and the Holy Spirit,
Amen.

Alice Meynell (1847—1922) is an English poet, writer, editor and activist. She received early encouragement from Alfred Tennyson. Her first book of poetry, Preludes, appeared in 1875. She spoke out on behalf of the oppressed in the face of European imperialism, and was the vice-president of the Women Writers' Suffrage League.

She, along with her husband, Wilfrid, published the poetry of Francis Thomson in their magazine Merrie England, assisted him in his recovery from opium addiction, and arranged to have his first poetry book published.

Twice she was considered for the post of poet laureate. In 1923 The Poems of Alice Meynell: Complete Edition appeared.

Christ in the Universe

With this ambiguous earth
His dealings have been told us. These abide:
The signal to a maid, the human birth,
The lesson, and the young Man crucified.

But not a star of all
The innumerable host of stars has heard
How He administered this terrestrial ball.
Our race have kept their Lord’s entrusted Word.

Of His earth-visiting feet
None knows the secret, cherished, perilous,
The terrible, shamefast, frightened, whispered, sweet,
Heart-shattering secret of His way with us.

No planet knows that this
Our wayside planet, carrying land and wave,
Love and life multiplied, and pain and bliss,
Bears, as chief treasure, one forsaken grave.

Nor, in our little day,
May His devices with the heavens be guessed,
His pilgrimage to thread the Milky Way
Or His bestowals there be manifest.

But in the eternities,
Doubtless we shall compare together, hear
A million alien Gospels, in what guise
He trod the Pleiades, the Lyre, the Bear.

O, be prepared, my soul!
To read the inconceivable, to scan
The myriad forms of God those stars unroll
When, in our turn, we show to them a Man.

Cyprian Kamil Norwid (1821—1883) is a Polish painter and poet. He grew up in Warsaw, but lived for many years in various cities including Berlin, Brussels, Rome, Paris, and even briefly in New York. In 1854 he settled permanently in Paris. His first published poem was, ironically, entitled "My Last Sonnet". Norwid wrote extensively about the philosophic, political, artistic and social issues of his day. The only book of his to appear in his lifetime was Poezje (Poems) published in Liepzig in 1863. By 1880 Norwid was becoming a recluse, partly due to poverty and his advancing deafness.

Although unnoticed in his lifetime the work of Cyprian Kamil Norwid was later discovered by the poet Zenon Przesmycki, who published Norwid's work in the journal Chimera between 1901 and 1907, and also published several volumes of Norwid's writing.

The past, death and pain are not acts of God,
But of law-breaking man,
Who therefore lives in dread
And sensing evil, wants oblivion!

But is he not like a child in a dray
Crying, "Oh, look, the oak's
Disappearing in the wood…",
While the oak's still and the child's borne away?

The past is now — though somewhat far:
Behind the dray a village barn,
And not something somewhere
Never seen by man!…

Les Murray is frequently called the leading Australian poet of his generation. He was raised in a rustic shack near Bunyah, New South Wales — a place of great significance in his poetry. When he was twelve, in 1951, his mother died, and Les had to return home from boarding school to look after his father, who amid the grief was unable to care for himself.

Murray biographer, Peter Alexander has written:
-------"In 1957 Murray went to the University of Sydney to study
-------modern languages. While there he worked on the editorial
-------boards of student publications. At Sydney he was
-------converted from the Free Kirk Presbyterianism of his
-------parents to Roman Catholicism, and the influence of
-------passionately held Christian convictions can be seen
-------everywhere in his verse, though seldom overtly; instead
-------it shows itself, in poems such as 'Blood' or 'The Broad
-------Bean Sermon,' in a strong sense of the power of ritual
-------sacramental in everyday life and of the quality of
-------existence."

It's been five years since the release of his latest collection of new poetry, Taller When Prone. In the mean time, however, his New Selected Poems appeared in the UK in 2012, and in the US in 2014. The following poem is available in this new book.

Religions are poems. They concert
our daylight and dreaming mind, our
emotions, instinct, breath and native gesture

into the only whole thinking: poetry.
Nothing's said till it's dreamed out in words
and nothing's true that figures in words only.

A poem, compared with an arrayed religion,
may be like a soldier's one short marriage night
to die and live by. But that is a small religion.

Full religion is the large poem in loving repetition;
like any poem, it must be inexhaustible and complete
with turns where we ask Now why did the poet do that?

You can't pray a lie, said Huckleberry Finn;
you can't poe one either. It is the same mirror:
mobile, glancing, we call it poetry,

fixed centrally, we call it a religion,
and God is the poetry caught in any religion,
caught, not imprisoned. Caught as in a mirror

that he attracted, being in the world as poetry
is in the poem, a law against its closure.
There'll always be religion around while there is poetry

or a lack of it. Both are given, and intermittent,
as the action of those birds — crested pigeon, rosella parrot —
who fly with wings shut, then beating, and again shut.