Luis Vaz de Camões (c.1524—1580) is the national poet of Portugal. Encyclopedia Britannica says that "Camões had a permanent and unparalleled impact on Portuguese and Brazilian literature alike..." He spent much of his life abroad. When fighting as a member of the Portuguese army in Morocco, he lost an eye. He served as a soldier in India for three years, was part of military campaigns in Arabia and East Africa, was shipwrecked on the African coast, and ended up in Mozambique — where he had to rely on the generosity of friends to help pay his passage home. In 1570 he arrived in Lisbon, having been away for seventeen years.

After his return to Lisbon he published The Lusiads (1572), an epic poem about the travels of the explorer Vasco da Gama. He also repented of the carnality of his youth, and wrote many fine poems of faith, including the following sonnets. Both of these were translated by William Baer and are from Luís de Camões: Selected Sonnets (Chicago, 2005).

You who seek serenity in the wide
tempestuous sea of the world, cease
and abandon all hope of ever finding peace,
except in Jesus Christ, God Crucified.
If wealth absorbs your thoughts and preoccupies
your nights, God is the greatest treasure of all;
And if you're looking for beauty, always recall
that God alone is the Beauty that satisfies.
If you seek delights to set your heart on fire,
remember that God's the sweetest of all, Who rewards
His followers with victory at last;
If honor and glory are what your most desire,
no greater honor or glory has ever surpassed
humbly serving the highest Lord of Lords.

O glorious cross, O victorious
and holy prize that encompasses everything;
O chosen miraculous sign ordained to bring
your remedy to each and every one of us.
O living font of sacred blood, expel
our sins and cure our sinful souls. In You,
O Lord, we know the almighty God, who
embodies the gentle name of mercy as well.
With you, the time of vengeance ends. A new
compassion flowers forth, forever and ever,
like after winter, when springtime blossoms again.
So vanquish all your enemies, Lord, You
who've made so many changes, yet never
cease to be exactly what You've always been. 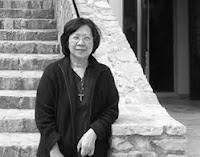 Anne Lee Tzu Pheng is a Singapore poet whose collections include The Brink of an Amen, and most-recently Standing in the Corner (2014, Landmark Books). She was awarded the Singapore Cultural Medallion for Literature in 1985, and Chile's Gabriela Mistral Award in 1995. She has recently retired from her position as a senior lecturer in the English Department of the National University of Singapore.

She is one of her nation's most distinguished poets, and along with Edwin Thumboo is a pioneer of Singapore poetry. Her book Short Circuits: Through the Catchments of Faith and Writing is a collection of short vignettes about her experiences with poetry, writing and God. Singapore poet Aaron Lee directed her work to my attention.

Robert Southwell (1561—1595) is an English poet who studied in France and in Rome, and was eventually ordained as a Jesuit priest in 1584. In that year it was proclaimed that such English-born ordained Catholics must not remain in England, on pain of death. Even so, Southwell returned to England as a Jesuit missionary in 1586.

He was arrested in 1592 and eventually imprisoned in the Tower of London. Much of his poetry is believed to have been written while he was in prison. He was hanged for high treason in 1595.

Shortly after his death St Peter's Complaint with Other Poems was anonymously published, and became very popular.

Upon The Image of Death

Before my face the picture hangs
That daily should put me in mind
Of those cold names and bitter pangs
That shortly I am like to find;
But yet, alas, full little I
Do think hereon that I must die.

I often look upon a face
Most ugly, grisly, bare, and thin;
I often view the hollow place
Where eyes and nose had sometimes been;
I see the bones across that lie,
Yet little think that I must die.

I read the label underneath,
That telleth me whereto I must;
I see the sentence eke that saith
Remember, man, that thou art dust!
But yet, alas, but seldom I
Do think indeed that I must die.

Continually at my bed's head
A hearse doth hang, which doth me tell
That I ere morning may be dead,
Though now I feel myself full well ;
But yet, alas, for all this, I
Have little mind that I must die.

The gown which I do use to wear,
The knife wherewith I cut my meat,
And eke that old and ancient chair
Which is my only usual seat,—
All these do tell me I must die,
And yet my life amend not I.

My ancestors are turned to clay,
And many of my mates are gone;
My youngers daily drop away,
And can I think to 'scape alone?
No, no, I know that I must die,
And yet my life amend not I.

Not Solomon for all his wit,
Nor Samson, though he were so strong,
No king nor person ever yet
Could 'scape but death laid him along;
Wherefore I know that I must die,
And yet my life amend not I.

Though all the East did quake to hear
Of Alexander's dreadful name,
And all the West did likewise fear
To hear of Julius Caesar's fame,
Yet both by death in dust now lie;
Who then can 'scape but he must die?

If none can 'scape death's dreadful dart,
If rich and poor his beck obey,
If strong, if wise, if all do smart,
Then I to 'scape shall have no way.
Oh, grant me grace, O God, that I
My life may mend, sith I must die.

Joy Davidman (1915—1960) is an American-born poet who is best known as the wife of C.S. Lewis. The 1993 movie Shadowlands (starring Anthony Hopkins and Debra Winger) dramatized the story of their relationship, right down to her death from cancer.

A Naked Tree: Love Sonnets to C.S. Lewis and Other Poems (Eerdmans, 2015) is a new comprehensive collection of her poetry, which includes the complete manuscript of her 1938 collection, Letter to a Comrade, which won both the Yale Series of Younger Poets Competition, and the Russell Loines Memorial Award. It also includes many poems addressed to Lewis, including a sequence of 45 love sonnets which she wrote in her pursuit of a love relationship with him.

My review of A Naked Tree will appear in the forthcoming issue of Sehnsucht: The C.S. Lewis Journal.

No, it was neither you, nor God, but I
Whose nature drove the dagger in my side
So deadly near my heart; if I should die
Of loving you, call it suicide.

Had I the choice of being otherwise
Than this meek amorous wretch? I cannot know;
I can be certain that I would not choose
Any lesser gate of death than you.

If I rebel, it is not that I crave for
More of this world's sweet poison in my food;
Only, when I see my children sleeping,
I think I have a task to keep alive for;
But they and I must take our chance on God.
Let it be as He wills, and no more weeping.

Samuel Taylor Coleridge (1772—1834) is a significant poet of English Romanticism, best known for such long poems as "Kubla Khan" and "The Rime of the Ancient Mariner." His primary interests were philosophy and religion. Between 1808 and 1819 he gave a series of lectures in London and Bristol, including many about William Shakespeare, which helped to renew interest in the bard.

In 1798 he became a Unitarian minister, but later came to believe that Unitarianism was incompatible with Christian belief. It is said that Coleridge's religious writings led to a revival of Christian philosophy in England.

The poet, Malcolm Guite, has written: "I could not begin to reckon the personal debt I owe to Coleridge; for his poetry, for his personal and Christian wisdom, above all for his brilliant exploration and defence of the poetic imagination as a truth-bearing faculty which participates in, and is redeemed by the Logos, the living Word, himself the Divine Imagination." Guite's book, Mariner! A Voyage with Samuel Taylor Coleridge (Hodder & Stoughton) is to appear in 2017.

God's child in Christ adopted, — Christ my all, —
What that earth boasts were not lost cheaply, rather
Than forfeit that blest name, by which I call
The Holy One, the Almighty God, my Father? —
Father! in Christ we live, and Christ in Thee —
Eternal Thou, and everlasting we.
The heir of heaven, henceforth I fear not death:
In Christ I live! in Christ I draw the breath
Of the true life! — Let then earth, sea, and sky
Make war against me! On my heart I show
Their mighty master's seal. In vain they try
To end my life, that can but end its woe. —
Is that a death-bed where a Christian lies? —
Yes! but not his — 'tis Death itself there dies.