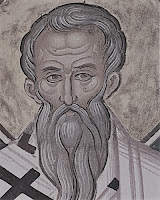 Clement of Rome was a first century convert to Christianity, and may even be the one mentioned in Paul’s epistle to the Philippians as one of the co-workers whose names are in the Book of Life.

Either way, he knew both Peter and Paul, and was a leader in the church at Rome. The present-day Church of San Clemente in Rome is believed to have been built over his house. He was martyred in 101 AD in Greece by — according to tradition — being tied to an anchor and thrown into the sea.

He wrote a letter to the church at Corinth, which is considered to be the earliest piece of post-New Testament Christian writing that we have.

The following prayer appears at the close of Clement’s letter to the Corinthians.

May God, who sees all things,
and who is the Ruler of all spirits
and the Lord of all flesh —
who chose our Lord Jesus Christ
and us through Him
to be a peculiar people —
grant to every soul that calls
on His glorious and holy Name,
faith, fear, peace, patience,
long-suffering, self-control,
purity, and sobriety,
to the well-pleasing of His Name,
through our High Priest and Protector,
Jesus Christ, by whom be to Him glory,
and majesty, and power, and honor,
both now and forevermore. Amen.