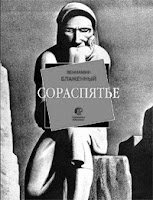 Veniamin Blazhenny (1921―1999) is a Russian-language poet who was born in a small Jewish village in Belarus. His literary pseudonym, "Blazhenny" is said to suggest both “Fool for Christ” and "Blessed". He corresponded with Boris Pasternak, sending him some of his early poetry ― although his poems remained unpublished until the late 1980s, due to censorship and the limited publishing options in the Soviet Union. To add injury to this insult, he was incarcerated in a Soviet psychiatric institution because he had the “delusion” that he was a poet. His first book did not appear until 1990.

He referred to his poetry as his “letters to God” in which he would often cry out or rage at him; “It always seemed to me that the Lord was somewhere nearby ― Here I will hail him with an excited voice.”

In 2017, Artur Klinau ― a significant Belarusian artist, writer and editor ― said in an interview, “The rediscovery of [Blazhenny] influenced the development of poetry in our country.”

The Soul Waking Up

The soul, waking up, will not recognize her house,
The darling earthly shelter.
She will wonder, forced by her destiny...
Why would she need a home when she is a soul?

And moving through the path of no return,
Through the vast expanses of the heavenly track,
The soul will take with her my earthly name
And my immense sorrows.

No, she will not take my every trouble,
But only the unbearable path,
Where step by step I prayed to God,
And step by step I struggled with my earthly limits.

A mysterious light will be spilled
At the turning point of time,
But the timeless chain [of spirit] will not be broken
Neither in this pitiful world, nor in the other.