Theophan the Recluse (1815―1894) is an Orthodox Bishop of Tambov and Shatsk ― which are cities in modern day Ukraine and Russia. He is known for his books about the spiritual life, and for contributing to the translation into Russian of the Philokalia, which is a collection of writings from early church fathers.

He had been appointed rector of Kiev’s church schools, and then of the seminary in Novgorod. Later he served as chief priest of the embassy church in Constantinople. Eventually Theophan was recalled to Russia to become rector of the Petersburg Academy.

In 1866 he chose to live a life of reclusion to concentrate on undisturbed communion with God. Through his many books, he continued to teach. He encouraged the use of established prayers, to help believers know how to pray.

Descend from your head into your heart

You must descend from
your head into your heart.
At present your thoughts of God
are in your head. And God Himself is,
as it were, outside you, and
so your prayer and other spiritual
exercises
remain exterior. Whilst you are still
in your head,
thoughts will not easily be subdued but
will always be whirling about, like snow
in winter or
clouds of mosquitoes in summer.

Email ThisBlogThis!Share to TwitterShare to FacebookShare to Pinterest
Labels: Theophan the Recluse 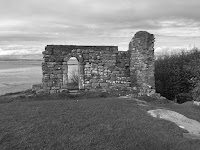 Marjorie Pickthall (1883―1922) is a writer and poet who served as an ambulance driver during WWI. At one time she was championed by conservative critics as the best Canadian poet of her generation ― valued as a moderate voice between populist poets such as Robert Service, and the influence of the modernists. Her reputation, however, has suffered the same fate as many Victorian and early 20th century poets, whose work fell out of fashion.

When she was still a 15-year-old student at Toronto’s Bishop Strachan School, one of her stories appeared in the major newspaper The Globe. While in her early twenties, she authored three adventure novels. Her writing also appeared in journals such as Atlantic Monthly, Harper’s, and Scribner’s. Her first poetry collection, The Drift of Pinions (1913) was the first of five books she produced during the final decade of her life.

Although she had moved to Vancouver, her body is buried in St. James Cemetery, Toronto.

In the high noon of the heavenly garden
Where the angels sunned with the birds,
Beauty, before their hearts could harden,
Had taught them heavenly words.

When they fled in the burning weather
And nothing dawned but a dream,
Beauty fasted their hands together
And cooled them at her stream.

And when day wearied and night grew stronger,
And they slept as the beautiful must,
Then she bided a little longer,
And blossomed from their dust.

Fenton Johnson (1888―1958) is a Chicago poet, playwright and writer, who was a significant forerunner to the Harlem Renaissance. By the time he was nineteen, several of his plays had been performed at various Chicago theatres. His early aspiration was to become a pastor, but in the end he attended journalism school at Columbia University. He went on to teach at the State University of Louisville, in Kentucky, and to work as a journalist in New York.

The first of his three poetry collections, A Little Dreaming, appeared in 1913. Many of his poems are written in dialect, which was popular at the time, and enabled him to shed light on his observations of American black culture, and on racial issues. His short story collection Tales of Darkest America appeared in 1920, as did his essay collection For the Highest Good. He edited two little magazines: the Champion, and Favorite, and was an early contributor to Poetry magazine.

He never gained the recognition of a major writer; in the 1930s his literary output dwindled to a trickle.

I love the world and all therein:
The panting, darkened souls who seek
A brighter light, a sweeter hope,
From those who drink the bubbling wine
And eat the flesh of tender fowl;
I love the pampered son of wealth,
And pour on him my pity's oil,
This world our God hath made for all, —
The East, the West, the black, the white,
The rich, the poor, the wise, the dumb, —
And even beasts may share the fruit;
No prison wall, but sunlight's glow,
No rods of steel, but arms of love,
For all that creep and walk and strive
And wear upon their countenance
Creation's mark, the kiss of God.

Miho Nonaka is a bilingual poet from Tokyo. Her first book of Japanese poems, Garasu no tsuki, was a finalist for Japan’s national poetry prize, and her poetry in English has been nominated for a Pushcart Prize. She is one of the poets I featured in In a Strange Land: Introducing Ten Kingdom Poets (2019, Poiema/Cascade).

The following poem is from In a Strange Land.

No confusion, not drunk, never
fear when you feel
the water bubbling

from within. Each soul
is a well, set apart, alone.
The sun is directly over

head, and a stranger
waits for you at the well,
thirsty. He has nothing to draw

with, and the well is deep.
So is every other well,
he reminds you. It’s not up to you

to decide whether you’ve
suffered long enough.
He knows your name,

doesn’t he? Love comes
in tongues of fire. Flames
won’t set you ablaze;

you will be unconsumed.
A pair of wings brush past
your eyes in silver flickers

as the sound of water nears.
Open your thirsty mouth.
He is offering your very self

in a glass, the same water that
connects every well flowing
between Father and Son.

The rushing water reverses
something of Babel
in each of us: an upturned

hourglass measuring
the immeasurable, holding
our shattered lives together.