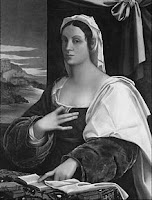 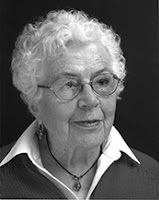 Madeline DeFrees (1919—2015) is the author of eight full-length poetry collections. In 1937 she entered the order of the Sisters of the Holy Names of Jesus and Mary, and took on the name of Sister Mary Gilbert. It was under this name that she published her early poetry, including her first collection, From the Darkroom (1964). Her greatest influences have perhaps been Hopkins, and Dickinson.

She is one of the poets featured in my anthology The Turning Aside: The Kingdom Poets Book of Contemporary Christian Poetry — (available here) and through Amazon.

When asked — in a 2009 Image interview with Jennifer Maier — about the pressure within the convent to avoid individuality, as she was developing as a poet, she said:
----"There was a lot of internal pressure away from poetry. I knew
----Hopkins had given it up because he thought it would interfere
----with prayer...I used to think that because poetry required a
----kind of total attention, and so did prayer, that they went
----together. I had superiors, at least one, who told me that I
----wasn’t anything special just because I was a poet. I knew I
----wasn’t supposed to be writing poems when I was supposed to be
----praying. But they really are very close."

DeFrees was released from her vows in 1973. She explained why her poems would rarely be seen as being particularly Christian:
----"I used to think that the reason I didn’t write religious poems
----was that I really respected religion, and there was nothing worse
----than a poem that wanted to be religious and fell short of the
----mark. The main shortcoming would be sentimentality."

At 47, Hope's driven to find her feet in construction.
She crawls the hip roof of her house like a cat burglar,
gives herself plenty of rope, lashed to
the chimney. In her left hand, she carries a loaded
staple gun. Her right grips the insubstantial.

Cordless phone in my lap, I watch at 74, from my rented
wheelchair, fingers tattooing 9-1-1.
Let me hop with the help of the Sunrise Medical Guardian
to the open door to rehearse
our common fate. We are Siamese joined by a bungee

cord at the inner ear, that delicate point of balance.
Every day we devise new methods
of locomotion. When my walker, upset by a comforter,
collapses to the floor and takes me
with it, I want to reverse the digits:

four and seven, seven and four. Yesterday, Hope wrestled
the circular saw over the edge
where she clung to the ridge and tripped on the safety
cord. It was then I heard the Sirens
wooing Ulysses tied to the mast. Twilight hangs fire

in the west, then snuffs it out. Behind the slant roof
of a dormer, Hope disappears. Two ladders
reach into the void. Is that white flash a sneakered
foot in search of a rung? I conjure a cloudy head
between the smokestack and the evergreen.

No matter how I strain, I cannot bring her back.
Reluctantly I fiddle with the blind,
hear a tune old as the burning of Rome as I weave
between the cave and the whirlpool for a saving
equilibrium. What if I call her Faith,
the evidence of things unseen?

Dulce María Loynaz (1902—1997) is a Cuban poet and novelist, who published her first poetry collection in 1938. After the Cuban Revolution (1959) she refused to join the communist party. Even though the Castro government had her books removed from libraries and ensured that she was not published, she did not go into exile, but lived quietly in Havana. In 1992 when she received Spain's greatest literary honour — The Cervantes Prize — her work was once again permitted publication in Cuba.

The following poem was translated by James O'Connor.

Poems With No Names — XCVII

----Lord, it is You who gave me these eyes. Where should
I turn them during this long dark night that will last
longer than my own eyes?
----King to whom I swore my first vow, it is You who
gave me these hands. What should I take and what should
I leave behind on this pilgrimage that makes no sense to
any of my senses, this pilgrimage where I never have
enough or I have much more than I need?
----Sweetness in the bitter-sweetness of my heart, it is You
who gave me this desert voice. What word is worthy of
scaling the high peak of your silence?
----Breath in the clay of my flesh, it is You who gave me
these feet. Tell me. Why did you put so many forks in the
road if You are the Way, the Truth and the Life?

Frederick Goddard Tuckerman (1821—1873) is an American poet who only published one book of poems in his lifetime: Poems (1860). His work was ignored by most of his contemporaries, although he received encouragement from Nathaniel Hawthorne and Alfred Tennyson, whom he had visited in his home on the Isle of Wight in 1855.

He completed a law degree from Harvard, but scarcely practiced. In the mid-1840s when he met and fell deeply in love with Hannah Jones, he began writing poems — primarily sonnets. They married in 1847. When she died shortly after the birth of their third child in 1857, Tuckerman was completely grief-stricken. It is out of this tragedy that much of his best poetry comes.

Although he was significantly influenced by the English romantic poets and the American romantics of his time, his rational, Anglican background, combined with the death of his dear wife, caused Tuckerman to become somewhat anti-romantic in his rejection of the pantheistic optimism of many of his contemporaries.

Jason Guriel wrote in The New Criterion, that Tuckerman "wrote poems too weird to be much appreciated in his own milieu, the United States of the nineteenth century, and not weird enough to distinguish the poet for many of his later readers who, failing to squint, saw little more than an accomplished sonneteer."

Not the round natural world, not the deep mind,
The reconcilement holds: the blue abyss
Collects it not; our arrows sink amiss
And but in Him may we our import find.
The agony to know, the grief, the bliss
Of toil, is vain and vain: clots of the sod
Gathered in heat and haste and flung behind
To blind ourselves and others, what but this
Still grasping dust and sowing toward the wind?
No more thy meaning seek, thine anguish plead,
But leaving straining thought and stammering word,
Across the barren azure pass to God:
Shooting the void in silence like a bird,
A bird that shuts his wings for better speed. 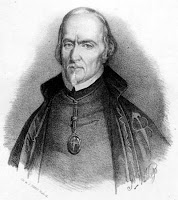