George Herbert (1593—1633) had not published a book of poetry in his own lifetime, but his book The Temple did appear shortly after his death in 1633. He and John Donne are the most influential of what we today call the Metaphysical Poets —a group that also includes, Henry Vaughan, Andrew Marvel and Thomas Traherne.

It seems that Herbert's ambition had nothing to do with fame, but with looking deeply into his own soul and seeking to be honest before God. Even so, his fame outstrips that of many who were seekers of a reputation. His influence is felt, not only in the poetry of the seventeenth century, but also in such writers as Emily Dickinson, Gerard Manley Hopkins, T.S. Eliot and W.H. Auden.

Herbert's poetry is suitable for spiritual meditation—helpful as we seek to reflect on God's faithfulness, and on our own fickleness.

*This is the second Kingdom Poets post about George Herbert: first post third post. You can also find a George Herbert poem that grew out of Isaiah 55 at: The 55 Project 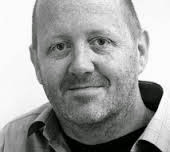 Michael Symmons Roberts is a British poet who has six full-length poetry books, all published by Jonathan Cape. His fourth, Corpus (2004) was awarded the Whitbread Prize, and was also short-listed for both the Griffin and the T.S. Eliot Prize. His latest collection, Drysalter (2013) recently received the Forward Prize and the Costa Prize. In 2006, in connection with a BBC television series, he published The Miracles of Jesus (Lion-Hudson). He has also published two novels.

When Symmons Roberts arrived as a student at Oxford, as a confident atheist, he intentionally changed his course to Theology and Philosophy, and selected a Christian college so he could talk believers out of their faith. "As university went on I got deeply into philosophy — and the philosophy completely undermined my atheism, by making me realize that there was no overarching objectivity, no Dawkinsian bedrock of common sense if you strip everything away. I realized that atheism was just as culturally conditioned as being a Catholic."

So, God takes your child by the hand
and pulls her from her deathbed.
He says: ‘Feed her, she is ravenous.’

You give her fruits with thick hides
– pomegranate, cantaloupe –
food with weight, to keep her here.

will not fray, nor wear so thin
that morning sun breaks through her,
shadowless, complete.

Somehow this reanimation
has cut sharp the fear of death,
the shock of presence. Feed her

roast lamb, egg, unleavened bread:
forget the herbs, she has an aching
fast to break. Sit by her side,

split skins for her so she can gorge,
and notice how the dawn
draws colour to her just-kissed face. 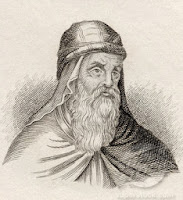 Gregory of Nazianus (circa 325—389) was Archbishop of Constantinople. He is known today as a significant theologian for his emphasis on the Trinity. He was a prolific writer—composing, some have said, as many as 30,000 verses; if this is true most of them have been lost.

Earlier this year, when I asked Scott Cairns, who were the significant poets among the early church fathers— which he had alluded to during a question period at the Festival of Faith and Writing in Grand Rapids, Michigan— he wrote on a slip of paper the names of Ephrem of Edessa (who I blogged about last December), Gregory of Nazianus, and Simeon the New Theologian.

It's been said, "St Gregory is one of the most open and self-revealing of the Fathers of the Church, and his poetry is remarkable for its personal character..."

Friends and fellow-workers they!
Day with night, and night with day!
Night descendeth, and the while
Thou dost call a halt to toil;
Bidding labour pause and rest,
Lulling care in weary breast.
When from rest again set free,
Sweet our work if done for Thee;
And we haste from night away,
All to hail the endless day,—
Day, most happy and most bright,
Ne'er to end in darksome night.

So bid sleep with gentle wing
O'er mine eyes her shadow fling;
Nor let dumb repose too long
Seal my tongue, nor hush my song;
Which, responsive I would raise,
To the angels' song of praise.

Thus, with holy thoughts of Thee,
Let my bed familiar be,
Lest ignoble dreams betray
The misdoings of the day ;
Lest my brain with phantoms teem,
Breeding trouble in my dream.
Rather let my soul take wing,
Free from thrall of sense, and sing:
To the Father and the Son,
And the Holy Spirit, One ;
Glory, honour, power to Thee!
Be to all eternity. Amen.

King David (c. 1040—970 BC) was described by God himself as a man after his own heart, and so he was selected to replace Saul as king over Israel. As a young man he had taken on the great Philistine warrior Goliath. He was also renown as a harp player, and had been called upon to play music to soothe the madness that tormented King Saul.

His passion for praising Yahweh is demonstrated by the story of David dancing before the Ark of the Covenant as it was brought into Jerusalem (2 Sam. 6). He is credited with having written the majority of poems in the biblical book of Psalms. Most significantly, it was prophesized that the Messiah—through whom the whole world would be blessed—would be a descendant of David. That prophesy was fulfilled in the coming of Jesus Christ.

In his book Reflections on the Psalms, C.S. Lewis said of the following poem (Psalm 19), "I take this to be the greatest poem in the Psalter and one of the greatest lyrics in the world." Here it is presented in the New International Version.

For the director of music. A psalm of David.

The heavens declare the glory of God;
---the skies proclaim the work of his hands.
Day after day they pour forth speech;
---night after night they reveal knowledge.
They have no speech, they use no words;
---no sound is heard from them.
Yet their voice goes out into all the earth,
---their words to the ends of the world.
In the heavens God has pitched a tent for the sun.
---It is like a bridegroom coming out of his chamber,
---like a champion rejoicing to run his course.
It rises at one end of the heavens
---and makes its circuit to the other;
---nothing is deprived of its warmth.

They are more precious than gold,
---than much pure gold;
they are sweeter than honey,
---than honey from the honeycomb.
By them your servant is warned;
---in keeping them there is great reward.
But who can discern their own errors?
---Forgive my hidden faults.
Keep your servant also from willful sins;
---may they not rule over me.
Then I will be blameless,
---innocent of great transgression.
May these words of my mouth
---and this meditation of my heart
---be pleasing in your sight,
---LORD, my Rock and my Redeemer.

Eugene H. Peterson is best known for his popular paraphrase of the Bible - The Message. He was a pastor at Christ Our King Presbyterian Church in Maryland for 29 years, and is Professor Emeritus of Spiritual Theology at Regent College in Vancouver.

Eerdmans has recently published his new poetry collection, Holy Luck (2013). In the introduction, he speaks of how he discovered poetry through reading the Psalms at age 13. He says, "Literal wasn't working for me," although that was the way his church community seemed to expect scripture to be read.

---"I plodded on, quite enjoying the rhythms and images,
---but puzzled how to make literal sense of them. And in
---the process of plodding, without really noticing what
---was happening, I quit trying to figure these psalms out
---and found myself drawn into a world of words in which I
---was no longer a questioner but a participant, and
---enjoying the participation."

The following poem is from his new collection.

"Blessed are those who hunger and thirst after righteousness"

Unfeathered unbelief would fall
Through the layered fullness of thermal
Updrafts like a rock; this red-tailed
Hawk drifts and slides, unhurried
Though hungry, lazily scornful
Of easy meals off carrion junkfood,
Expertly waiting elusive provisioned
Prey: a visible emptiness
Above an invisible plenitude.
The sun paints the Japanese
Fantail copper, etching
Feathers against the big sky
To my eye's delight, and blesses
The better-sighted bird with a shaft
Of light that targets a rattler
In a Genesis-destined death.