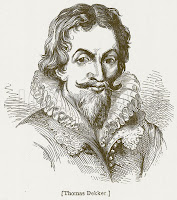 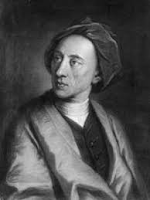 Alexander Pope (1688—1744) is a British poet known for his long and satirical poems — such as The Rape of the Lock (1714) and The Dunciad (1728). He was highly influenced by John Dryden, and is said to have perfected Dryden’s technique of rhymed couplets.

He is considered to be the first full-time self-supporting English writer, which came about through selling subscriptions to editions of his translations of Homer, and his editions of Shakespeare.

In his poem An Essay on Man (1733) Pope presents, as The Poetry Foundation puts it, “an aesthetic and philosophical argument for the existence of order in the world, contending that we know the world to be unified because God created it.”

Thou art my God, sole object of my love;
Not for the hope of endless joys above;
Nor for the fear of endless pains below,
Which they who love thee not must undergo.

For me, and such as me, thou deign'st to bear
An ignominious cross, the nails, the spear:
A thorny crown transpierc'd thy sacred brow,
While bloody sweats from ev'ry member flow.

For me in tortures thou resignd'st thy breath,
Embrac'd me on the cross, and sav'd me by thy death.
And can these sufferings fail my heart to move?
What but thyself can now deserve my love?

Such as then was, and is, thy love to me,
Such is, and shall be still, my love to thee —
To thee, Redeemer! mercy's sacred spring!
My God, my Father, Maker, and my King!

George Moses Horton (1797—1884) is a North Carolina poet who was a slave. He was born on the plantation of William Horton, where he taught himself to read, although he could not write. He composed poems in his mind, and then recited them to others.

His first book The Hope of Liberty was published in 1829 after his master had permitted him to visit the University of North Carolina at Chapel Hill, where students encouraged his poetry, and where a professor’s wife tutored and assisted him. This made him the first black author in the South to publish a book. His hope had been to earn enough from his poetry to secure his freedom, but this was not the case. He wrote two further books of poetry: Poetical Works (1845) and Naked Genius (1865).

He wrote many poems of Christian faith, such as: “On the Truth of the Saviour” which includes the lines:
-----Behold the storms at his rebuke,
-----All calm upon the sea—
-----How can we for another look,
-----When none can work as he?

George Moses Horton served in the Union army during the American Civil War; after the war he moved to Philadelphia, where he lived until his death.

On The Conversion of a Sister

'Tis the voice of my sister at home,
Resigned to the treasures above,
Inviting the strangers to come,
And feast at the banquet of love.

'Tis a spirit cut loose from its chain,
'Tis the voice of a culprit forgiven,
Restored from a prison of pain,
With the sound of a concert from heaven.

'Tis a beam from the regions of light,
A touch of beatific fire;
A spirit exulting for flight,
With a strong and impatient desire.

'Tis a drop from the ocean of love,
A foretaste of pleasures to come,
Distilled from the fountain above,
The joy which awaits her at home.

Philip C. Kolin is the Distinguished Professor of English (Emeritus) at the University of Southern Mississippi. He is a very prolific writer, having authored more than 40 books. He has also published numerous poetry collections including Departures (2014, Negative Capability), Benedict’s Daughter (2017, Resource Publications), and his newly-released Reaching Forever (Poiema Poetry Series).

It has been my privilege to work with Philip C. Kolin as the editor for this new book. I have also included one of his poems on my new web-journal Poems For Ephesians, which is on the McMaster Divinity College website.

Kolin is very active in the literary world, having, for example, recently co-edited a collection of poems about the Mississippi River for Louisiana Literature Press entitled Down to the Dark River. He is also the editor of the Southern Quarterly.

The following poem first appeared in America, and is from Reaching Forever.

Let your eyes write
new tears for a pilgrimage
to a place you cannot see.

But wait
for the thick darkness.
That is when he will call

for you. Till then
quiver your soul.
Don’t think about

being made in his image.
You will only be looking
into a dark mirror.

He lives in infinity, and his voice is
an octave higher than silence.
His words thrum

through the clouds.
He whispers fire and speaks
in endless vowels.

He comes with a river bird
asperging feathers.
Pray for the sky that absorbs

evaporating continents
and black-plumed sins.
As his train goes by,

you realize you do not
have to wear
your body anymore.