Maya Angelou (1928―2014) is a popular American poet, famous for the seven autobiographies she wrote, beginning with I Know Why the Caged Bird Sings (1969) which first brought her fame.

She started her performance career as a dancer in the 1950s, touring Europe in a production of Porgy and Bess, releasing an album, and singing her own songs in the 1957 film Calypso Heat Wave. She was an active supporter of Martin Luther King Jr. after hearing him speak at a Harlem church in 1960. Years later she read one of her poems at the inauguration of President Bill Clinton.

There is a poem in circulating on the internet called “I am a Christian” falsely attributed to Angelou. She was sometimes hesitant to make such a claim, seeing it as a declaration of having achieved holiness. She did say, though,
-----“I have always tried to find myself a church. I have studied
-----everything. I spent some time with Zen Buddhism and Judaism
-----and I spent some time with Islam. I am a religious person. It
-----is my spirit, but I found that I really want to be a Christian.
-----That is what my spirit seems to be built on. I just know that
-----I find the teachings of Christ so accessible. I really believe
-----that Christ made a sacrifice and for those reasons I want to be
-----a Christian.”

Petulant priests, greedy
centurions, and one million
incensed gestures stand
between your love and me.

Your agape sacrifice
is reduced to colored glass,
vapid penance, and the
tedium of ritual.

Your footprints yet
mark the crest of
billowing seas but
your joy
fades upon the tablets
of ordained prophets.

Visit us again, Savior.
Your children, burdened with
disbelief, blinded by a patina
of wisdom,
carom down this vale of
fear. We cry for you
although we have lost
your name.

Shann Ray is a poet and writer who teaches at Gonzaga University in Spokane, Washington. His first poetry collection Balefire (2014) won the High Plains Book Award for poetry, and his short story collection American Masculine (2011, Graywolf) received the American Book Award. He also writes social science as Shann Ray Ferch. His work has appeared in such publications as Poetry, Esquire, and McSweeney’s, and has received numerous awards besides those already mentioned.

Shann spent part of his childhood on the Northern Cheyenne Reservation in Southeast Montana, which is reflected in his writing ― including in his novel American Copper, which deals with issues of the horrific colonization of the Cheyenne people.

The following poem previously appeared in Diode, and is from Atomic Theory 7.

two things dostoyevski said:
beauty will save the world
and nothing is more beautiful than Christ

place our hands into the coarse black coat of winter wolves

John F. Deane is an Irish poet from Achill Island. His numerous poetry collections include Snow Falling on Chestnut Hill: New and Selected Poems (2012) and Dear Pilgrims (2018) both from Carcanet. His contributions to the art of poetry in Ireland, to the rest of the English-speaking world and even well beyond that, are significant. He has received such awards as the O’Shaughnessy Award for Irish Poetry, and has been named Chevalier, Ordre des Arts et des Lettres by the French government. On a personal note, I have found Deane to be one of the poets who most speaks to me in recent years.

His poetry can be found in several Irish anthologies, and is one of the poets I featured in the International anthology, The Turning Aside: The Kingdom Poets Book of Contemporary Christian Poetry.

In reading his book Give Dust a Tongue: A Faith & Poetry Memoir (2015, Columba) I was taken with his vision to participate in fulfilling “the need for our world and age to forge a poetry of personal encounter with Jesus” ― a significant calling, and a quest worth pursuing! He tells me that his new collection Naming of the Bones is to appear from Carcanet in November of 2021.

The following poem first appeared in The Christian Century and is from his recent collection Dear Pilgrims.

The Whole World Over

I see him, mariner Jesus, walking on corrupted
waters of the Danube while down in silted depths
lurk the unexploded bombs of lately wars; I walk out,
hand in hand with the poem, crossing on the high

redemption bridge, to earth corrupted by tar and concrete,
where down in the darkly shiftless soil words crawl,
eyeless and eager. Between sleep and day, light
and black, I grow conscious of compelling truths—

Jesus plods on over all the corrupted waters
heading for the unforgiving hill, for his piercing
cry of forgiveness out-into-the-outraged world. 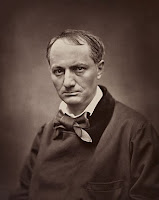 Charles Baudelaire (1821―1867) is a French writer whose style of prose-poems was influential for the following generation of French poets. He is also known as an art critic ― championing Delacroix ― and for his translations into French of Edgar Allan Poe. His biographers suggest that the sense of abandonment he felt during childhood, at his mother’s remarriage after his father’s death, was traumatic for him and contributed to his later excesses.

His first poetry collection The Flowers of Evil (1857) received both praise and passionate opposition, due to its scandalous content. He was prosecuted for creating an offense against public morals, which resulted in fines for himself, his publisher, and the printer.

Burl Horniachek expresses, in a new article about Baudelaire’s prose-poems in The McMaster Journal of Theology & Ministry, that for many years he believed strongly in human depravity, but not in the possibility of redemption. Horniachek says:
-----“One might wonder why Christians in particular should be
-----interested in a poet with such a reputation for Satanism
-----and blasphemy… His poetry is suffused with Christian imagery,
-----and frequently addresses serious theological issues.
-----Furthermore, it should not be a surprise that Baudelaire
-----eventually did have a sincere religious conversion to Catholic
-----Christianity later in life, well before his death bed.”

The following poem, translated by South African poet Roy Campbell, was written after Baudelaire’s conversion ―which happened four years prior to his death.

Harpagon watched his father slowly dying
And musing on his white lips as they shrunk,
Said, "There is lumber in the outhouse lying
It seems: old boards and junk."

Celimene cooed, and said, "How good I am
And, naturally, God made my looks excell"
(Her callous heart, thrice-smoked like salted ham,
Will burn in endless Hell!)

A smoky scribbler, to himself a beacon,
Says to the wretch whom he has plunged in shade —
"Where's the Creator you so loved to speak on,
The Saviour you portrayed?"

But best of all I know a certain rogue
Who yawns and weeps, lamenting night and day
(Impotent fathead) in the same old brogue,
"I will be good — one day!"

The clock says in a whisper, "He is ready
The damned one, whom I warned of his disaster.
He's blind, and deaf, and like a wall unsteady,
Where termites mine the plaster."

Then one appeared whom all of them denied
And said with mocking laughter "To my manger
You've all come; to the Black Mass I provide
Not one of you's a stranger.

You've built me temples in your hearts of sin.
You've kissed my buttocks in your secret mirth.
Know me for Satan by this conquering grin,
As monstrous as the Earth.

D'you think, poor hypocrites surprised red-handed
That you can trick your lord without a hitch;
And that by guile two prizes can be landed —
Heaven, and being rich?

The wages of the huntsman is his quarry,
Which pays him for the chills he gets while stalking
Companions of my revels grim and sorry
I am going to take you walking,

For it is built of Universal Sin
And holds of me all that is proud and glorious"
— Meanwhile an angel, far above the din,
Sends forth a peal victorious

For all whose hearts can say, "I bless thy rod;
And blessed be the griefs that on us fall.
My soul is but a toy, Eternal God,
Thy wisdom all in all!"

And so deliciously that trumpet blows
On evenings of celestial harvestings,
It makes a rapture in the hearts of those
Whose love and praise it sings.