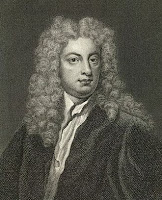 Joseph Addison (1672―1719), the son of an eminent clergyman, is an English poet, essayist, playwright and politician. His first book, Account of the Greatest English Poets (1694), and his translation of Virgil’s Georgics appeared while he was still a student at Magdalen College, Oxford. His early success drew the admiration of his peers, and the attention of wealthy benefactors.

A commission to write a poem for the Battle of Blenheim (The Campaign) also impressed the Earl of Halifax, which led to a position within his government. Addison not only served as a member of parliament, but rose to the position of Secretary of State in 1717. Although his play Cato was a literary influence on the American Revolution ― George Washington having sponsored a performance of Cato for the Continental Army at Valley Forge ― Addison is best known today for his essays.

The following is just one of several hymns penned by Addison.

How Are Thy Servants Blest, O Lord!

How are Thy servants blest, O Lord!
How sure is their defense!
Eternal wisdom is their guide,
Their help Omnipotence.

In foreign realms, and lands remote,
Supported by Thy care,
Through burning climes they pass unhurt,
And breathe in tainted air.

When by the dreadful tempest borne
High on the broken wave,
They know Thou art not slow to her,
Nor impotent to save.

The storm is laid, the winds retire,
Obedient to Thy will,
The sea, that roars at Thy command,
At Thy command is still.

From all our griefs and fears, O Lord,
Thy mercy sets us free;
While in the confidence of prayer
Our hearts take hold on Thee.

In midst of dangers, fears and death,
Thy goodness we adore;
We praise Thee for Thy mercies past,
And humbly hope for more

Our life, while Thou preservest life,
A sacrifice shall be;
And death, when death shall be our lot,
Shall join our souls to Thee.