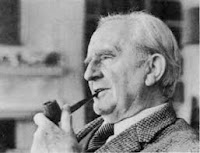 J.R.R. Tolkien (1892―1973) is one of the most influential novelists of the 20th century. His fantasy novel The Hobbit (1937, Unwin) and the subsequent trilogy The Lord of the Rings (1954-1955) led directly to a huge resurgence of fantasy literature over the past sixty-plus years.

His friendship with C.S. Lewis is well-documented and celebrated ― particularly Jack Lewis’s championing of The Hobbit, and his encouragement for Tolkien to complete and publish its famous sequel.

The poem Mythopoeia ― which can be read here in its entirety ― is Tolkien’s creative response to an evening of debate with Lewis (and Hugo Dyson) on September 19, 1931 concerning whether myths might be fit vessels to contain truth. The agnostic Lewis said myths were "lies breathed through silver". It is noteworthy that it was only a few days later that C.S. Lewis came to the realization of the truth of the gospel of Jesus Christ ― under the influence of his friend Tolkien.

In his book Faith, Hope and Poetry (2008, Routledge) Malcolm Guite shares the following excerpt from Tolkien’s poem to express how our imaginations, though tainted by the fall, have not been totally overthrown.

The heart of Man is not compound of lies,
but draws some wisdom from the only Wise,
and still recalls him. Though now long estranged,
Man is not wholly lost nor wholly changed.
Dis-graced he may be, yet is not dethroned,
and keeps the rags of lordship once he owned,
his world-dominion by creative act:
not his to worship the great Artefact,
Man, Sub-creator, the refracted light
through whom is splintered from a single White
to many hues, and endlessly combined
in living shapes that move from mind to mind.