Jane King is a Saint Lucian poet, actor and theatre director. Her poetry collections include, Fellow Traveller which won the James Rodway Memorial Prize (awarded to her by Derek Walcott) and most-recently Performance Anxiety: New and Selected Poems (Peeple Tree, 2013). Her husband is the poet and playwright Kendal Hippolyte.

She is a Dean and senior lecturer in English at the Sir Arthur Lewis Community College in St Lucia. She has served as a judge and chairperson for the Commonwealth Writers Prize. She is also the founding director of Lighthouse Theatre Company in St Lucia.

It used to bother me when they said that God
made us to know him, love him and serve him.
It made our creation seem something of a whim
and it was difficult as a child to be overawed
by the concept of a being who needed so much laud.
A bit like the he-made-us-in-his-own-image thing
which seemed to justify so much bad seeing
because we all have somewhere a great need to be adored.

But walking down a brash Manhattan street one day
it occurred to me that the whole world is really a play.
God's into theatre, making all the scenes, casting
the roles, doing sets, lighting, costumes, in a lasting
whole. He needs us as an audience, needs comments from us.
Lord, I'm sorry that I was too slow. You are to be adored.

Posted with permission of the poet. Thanks to Burl Horniachek for suggesting this, and several other poets.

Tommaso Campanella (1568—1639) is an Italian philosopher, poet, and Dominican friar. He joined the Dominican order in 1583, but was arrested, tried and imprisoned for heresy when his Philosophy Demonstrated by the Senses (1591) was published. Later in Rome he was tried again, and, in 1596, had to renounce his heresy.

Campanella was a leader in a plot to overthrow Spanish rule in Calabria (Southwest Italy). He was arrested, taken to Naples, and tortured into confessing his involvement. To escape death, he feigned madness, and was sentenced to life in prison.

Among his best-known works is a utopia called The City of the Sun, which he wrote during his 27-year imprisonment. Under his ideal government private property, poverty and excessive wealth would not exist. He also wrote lyrical poetry, which is praised for its originality.

Freed and chained, accompanied and alone,
screaming, quiet, I confuse the fierce crowd:
mad to the mortal eye of the lowly world,
wise to the divine Intellect of the celestial pole.
With wings clipped on earth, I fly to heaven
in sad flesh but of rejoicing soul;
and, if sometimes the heavy weight pulls me down,
my wings, though, lift me above the hard ground.
Dubious war makes virtues manifest.
Every other time is short compared to eternity,
and nothing is lighter than a welcome weight.
I wear the image of my love on my forehead,
assured of arriving blessed, on time,
where I may always be understood without speaking.

Eduard Mörike (1804—1875) is a German poet and novelist. Encyclopedia Britannica describes him as "one of Germany's greatest lyric poets." He became a Lutheran pastor in 1834, but was unable to maintain his position due to ill-health. By 1851 he had become a professor of German Literature in Stuttgart, and was able to fulfill this role until his retirement in 1866.

His 1832 novel, Nolten the Painter, first brought him attention as a writer. He is also remembered for his humour—such as in Mozart on the Way to Prague—and his fairy tales—such as The Little Dried-Up Man. His poems, however, are his greatest literary contribution. Mörike's lyrics have been set to music as folk tunes, and for opera.

Ludwig Wittgenstein described Mörike to his teacher Bertrand Russell as, "really a great poet and his poems are among the best things we have..."

The following poem is translated by David Luke.

I saw a painting once, a wondrous work it was,
In a Carthusian monastery I know well.
Today again, my solitary mountain walk
High among rigid scattered rubble of wild rocks
Has brought its lively colours back before my mind.
Beside a stony chasm, edged with scanty green
Where, shaded by two palm-trees, goats that graze on this
Precipitous slope enjoy a meagre nourishment,
It shows the Christ-Child, seated there on barren stone;
A soft white fleece is cushion for his tender limbs.
A little less than childlike looks this lovely boy;
Hot summers (five of them he must have seen by now)
Have gently browned his healthy skin, his delicate cheeks,
His arms and legs which to the knees are covered by
A little yellow tunic, purple at the hem.
Out of his dark eyes glows a quiet inward fire,
Yet a strange nameless charm hovers about his lips.
An aged friendly shepherd, stooping over him,
Has given him a plaything curiously shaped,
A petrifact from the sea's depths. The boy has held
This wonder in his hand and looked at it,
And now his gaze seems startled, widened into thought,
Staring at me, yet actually objectless,
Piercing eternal distances of infinite time:
As if there flickered on his clouded brow a flash
of divine consciousness, an inkling that must fade,
In the same instant; and the Maker of the worlds,
The Word in the Beginning, as an earthly child at play,
Smiling and all unwitting, shows me His own work.

Thanks again to Burl Horniachek for suggesting this post. 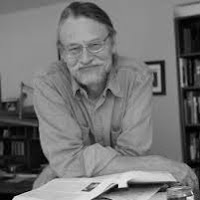 Walter Wangerin Jr. won the National Book Award for his first novel The Book of the Dun Cow (1978). He has since published more than thirty books, including the poetry collection A Miniature Cathedral and Other Poems (Harper & Row, 1987). His most-recent book is a memoir — Everlasting Is The Past (Rabbit Room Press).

The Book of the Dun Cow was inspired by a fable in Geoffery Chaucer's Canterbury Tales. It has been adapted into a musical, which was produced as an Off-Broadway show in 2006. Wangerin has written two sequels The Book of Sorrows (1985) and Peace At Last (2013).

He is a Senior Research Professor at Valparaiso University in Indiana, where he has taught since 1991. Prior to this he served for 16 years as a Lutheran pastor in Evansville, Indiana.

Among the branches a white ganglion
writhes in
primitive thought

suspecting soon
a wrack of
metamorphosis

and this
a dysphagic
dying

nor worms
of
resurrection