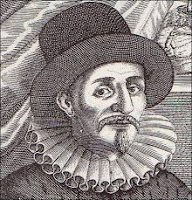 Guillaume de Salluste du Bartas (1544—1590) is a French Huguenot, who served in the court of Henri IV, from well before he came to the French throne.

Du Bartas’ divine poetry was appreciated across Europe during the sixteenth and seventeenth centuries. At the turn of that century he was still the most esteemed poet in France, although literary fashions changed later in the 1600s. Because of his Protestant views, his influence was felt much longer in England — where he had made a significant impression on Philip Sydney, Edmund Spenser, and John Milton. James VI of Scotland’s enthusiasm for du Bartas’ verse also spread the poet’s fame.

He also made an impact on the Metaphysical poets. C.S. Lewis wrote in English Literature in the 16th Century, “…no one can point to a moment at which poetry began to be Metaphysical nor to a poet who made it so; but of all poets perhaps Guillaume de Salluste du Bartas… comes nearest to that position.”

The following is from Joshua Sylvester's translation, which appeared in editions from 1608 to 1641, and is part of the first poem from The Divine Weeks (Part 1—Building The World)

from The First Day

No sooner said He, “Be there light,” but lo!
The formless lump to perfect form ‘gan grow,
And all illustred with light’s radiant shine,
Doffed mourning weeds and decked it passing fine.
All hail, pure lamp, bright, sacred and excelling;
Sorrow and care, darkness and dread repelling;
The world’s great taper, wicked men’s just terror,
Mother of truth, true beauty’s only mirror—
God’s eldest daughter! O, how thou art full
Of grace and goodness! O, how beautiful!
Since thy great Parent’s all-discerning eye
Doth judge thee so, and since His Majesty—
Thy glorious Maker—in His sacred lays
Can do no less than sing thy modest praise.