Christina Rossetti (1830—1894) is one of the best-known English poets of the nineteenth century. Her most famous collection is Goblin Market and Other Poems (1862). Her work became somewhat neglected with the rise of modernism in the early twentieth century, but gained a resurgence by the 1970s. She is said to have been a significant influence on Gerard Manley Hopkins, Elizabeth Jennings and Philip Larkin, among others.

In 1871 she was diagnosed with Graves' Disease, which she bravely endured with the help of her strong faith. She continued publishing poetry at this point, including A Pageant and Other Poems (1881), but primarily focused on devotional prose writing. She was considered the obvious candidate to succeed Alfred, Lord Tennyson as poet laureate — but she developed cancer in 1891, which eventually took her life.

Out in the rain a world is growing green,
--On half the trees quick buds are seen
----Where glued-up buds have been.
Out in the rain God's Acre stretches green,
--Its harvest quick tho' still unseen:
----For there the Life hath been.

Yea, Christ hath died, yea, Christ is risen again:
--Wherefore both life and death grow plain
----To us who wax and wane;
For Christ Who rose shall die no more again:
--Amen: till He makes all things plain
----Let us wax on and wane. 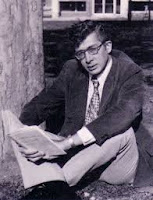 John Ditsky (1938—2006) is a poet, and a literary scholar. He taught at several American universities before settling as an English professor at the University of Windsor, in Ontario, where he spent most of his career. His contribution to studies of American novelist John Steinbeck is extensive, having written several books and numerous essays about his work. Another of John Ditsky's books of literary assessment is: The Onstage Christ: Studies in the Persistence of a Theme.

Ditsky published more than 1300 poems in literary journals and wrote four collections of poetry, including Scar Tissue (1978). He also served for many years as Poetry Editor for Windsor Review.

On Good Friday, our Good
Friday, the sun shone
and the frogs sang antiphons;

the geese blew roaster
horns and the skunk cabbage
ruffled upward out of stream
beds. And if this was nearly
all — this and the woodpecker's

prospecting — there would be
more to come. For the Lord
went winking to his grave.

Mary Oliver is, according to the New York Times, by far the best-selling US poet. Her first book, No Voyage and Other Poems, appeared in 1963, and she has since published more than twenty collections. Through the years her voice has developed as one who is very attentive and appreciative of the natural world, and thankful to God for every little beautiful detail.

Mary Oliver's American Primitive (1983) won the Pulitzer Prize, and her New and Selected Poems (1992) won the National Book Award. Her most recent poetry collection is Felicity.

The following poem is from her 2006 collection, Thirst. I thought it would be a fine place to begin our Easter anticipations, as we move toward Palm Sunday.

The Poet Thinks about the Donkey

On the outskirts of Jerusalem
The donkey waited.
Not especially brave, or filled with understanding,
He stood and waited.

How horses, turned out into the meadow,
Leap with delight!
How doves, released from their cages,
Clatter away, splashed with sunlight!

But the donkey, tied to a tree as usual, waited.
Then he let himself be led away.
Then he let the stranger mount.

Never had he seen such crowds!
And I wonder if he at all imagined what was to happen.
Still, he was what he had always been: small, dark, obedient.


Entry written by D.S. Martin. His latest poetry collection, Conspiracy of Light: Poems Inspired by the Legacy of C.S. Lewis, is available from Wipf & Stock as is his earlier award-winning collection, Poiema.
Posted by D.S. Martin at 3:00 AM

Sheldon Vanauken (1914—1996) is an American writer, best known for his autobiographical book A Severe Mercy (1977). It tells the story of the extremely devoted relationship he and his wife Davy shared, about their conversion to Christian faith, and about how he coped with her death when she was just 40 years old.

After World War II, while he was on sabbatical from his teaching position at Lynchburg College in Virginia, they were living in Oxford. Through the influence of some Christian students who had befriended them, they came to embrace Christianity. C.S. Lewis was a significant influence over their circle, and their growing faith. Included in the book are 18 letters written by Lewis to Vanauken, which helped him through this difficult time. A movie version of A Severe Mercy is presently in production.

The soul for comfort holds herself to be
Inviolate; but like the blowing sands
That sift in shuttered houses, Christ’s demands
Intrude and sting, deny her to be free

She twists and turns but finds it vain to flee,
The living Word is in the very air,
She can’t escape a wound that’s everywhere,
She can but stand or yield—to ecstasy

Her Lord is seeking entrance; she must choose.
A thickening callous can withstand the pain
Of this rough irritant, the sands that swirl
Against her thus defied. But if she lose
Her self, Christ enters in—the sharp-edged grain
Of sand embedded grows a shining pearl”