Vachel Lindsay (1879—1931) devoted his life to preaching what he called the “Gospel of Beauty”. In 1904 he began to experience mystical visions, whose images surface in many of his poems. After trying pre-med studies, and then art school in Chicago and New York, in 1906 Lindsay tramped from Florida to Kentucky by foot, idealistically seeking to exchange his poetry booklet The Tree of Laughing Bells for a meal and a night’s lodging along the way. Such tramping and travel became his life.

His breakthrough came with the poem “General William Booth Enters into Heaven”, a tribute to the founder of the Salvation Army, which appeared as the lead piece in Poetry in January 1913. His brief romance with poet Sara Teasdale ended when she refused to marry him, in favour of a wealthy shoe manufacturer in 1914.

Although Lindsay was one of the best-known poets in the United States during the last twenty years of his life, he had long struggled with financial troubles and with physical and mental health issues. He could not support his family without heading out on reading tours. On December 5, 1931, a disheartened Vachel Lindsay committed suicide by drinking a bottle of lye.

In performance, Lindsay would sing or chant his poems; he championed musical qualities in poetry, which became less popular with the rise of modernism after his death.

O great heart of God,
Once vague and lost to me,
Why do I throb with your throb tonight,
In this land, eternity?

O little heart of God,
Sweet intruding stranger,
You are laughing in my human breast,
A Christ-child in a manger.

Heart, dear heart of God,
Beside you now I kneel,
Strong heart of faith. O heart not mine,
Where God has set His seal.

Wild thundering heart of God
Out of my doubt I come,
And my foolish feet with prophets' feet,
March with the prophets' drum. 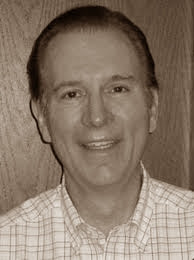 Philip C. Kolin is the author of five books of poetry. His most recent collection is Reading God's Handwriting (Kaufmann Publishing, 2012). He has taught in the English Department of the University of Southern Mississippi since 1974, and was recently made the Distinguished Professor in the College of Arts and Letters. Kolin is a Shakespeare scholar, is a significant authority on Tennessee Williams, and has written extensively about modern American playwrights. He has published more than forty books.

In a recent interview he said, "In many ways, my poetry marks my own spiritual autobiography, my encounters with God on the peaks, the plateaus, and the deep valleys." He is the founding editor of the Christian poetry journal Vineyards.

Read my review for Ruminate of Reading God's Handwriting here.

It's the love affair
between your soul and God's will,

the unflickering oil in your lamp
waiting for the bridegroom

to arrive after so many dark midnights,
listening for his footsteps.

It's looking for pearls,
a missing drachma,

that stray sheep who's wandered off
beyond the pasture.

over montains to provide
a sanctuary for doves.

It's the joyous breaking of
bread and finding a star inside

and the martyr's kiss
imprinted on the chalice.

It's sprinkling blood on your doorposts
with holy writing embedded in the frame.

It's God's spirit healing your withered flesh.
It's finding your name in His blazing
Book of Life.

Narayan Vaman Tilak (1861—1919) is a Brahman poet of the Marathi language in India. While travelling by train in 1893 he met a Christian missionary who gave him a Bible. Tilak, who had felt dissatisfied with Hinduism’s ritualism and its caste system, felt very attracted to Christianity. He was particularly drawn to the words of Jesus in the Sermon on the Mount.

Because of the distance of father-figures and the closeness of mothers, in Indian culture, Tilak chose to describe Jesus from a more Indian perspective:
------"Tenderest Mother-Guru mine,
------Saviour, where is love like Thine?..."
Professor Richard Fox Young of Princeton Theological Seminary wrote that “to discover his real voice and to put a recognizably Indian face on Christianity, Tilak felt compelled to reject the worship forms in the American mission churches...In a famously subversive poem of protest, he complained that in those churches ‘we dance as puppets, while [missionaries] hold the strings.’ In Tilak’s heart, only Christ could strike the right chords.”
I Have Called You Friends
One who is all unfit to count
----As scholar in Thy school,
Thou of Thy love hast named a friend —
----O kindness wonderful!
So weak am I, O gracious Lord,
----So all unworthy Thee,
That e’en the dust upon Thy feet
----Outweighs me utterly.
Thou dwellest in unshadowed light,
----All sin and shame above —
That Thou shouldst bear our sin and shame
----How can I tell such love?
Entry written by D.S. Martin. He is the award-winning author of the poetry collections Poiema (Wipf & Stock) and So The Moon Would Not Be Swallowed (Rubicon Press). They are both available at: www.dsmartin.ca
Posted by D.S. Martin at 3:00 AM

Robert Bridges (1844—1930) wanted to be a poet when he was young, but instead became a doctor. At age 37 he retired, due to illness, and dedicated himself to writing. He was a formalist in style, with great skill in his use of meter. Despite not being well known, he became Britain’s poet laureate in 1913.

In 1899 he published the Yattendon Hymnal, for the purpose of preserving early hymn tunes; this led him to translate many of the hymns himself from Latin, Greek and German.

Perhaps his greatest contribution to poetry, was presenting the work of his friend Gerard Manley Hopkins. He arranged for a posthumous collection of Hopkins’ work in 1918. Ironically, as Hopkins’ biographer Paul Mariani makes plain, Bridges didn’t really understand his friend’s poetics, and stumbled on his Catholicism.

Robert Bridges’ own masterpiece is Testament of Beauty (1929). Just prior to his death, it led to great popularity for a poet who had spent much of his life in quiet seclusion.

I Love all Beauteous Things

I love all beauteous things,
---I seek and adore them;
God hath no better praise,
And man in his hasty days
---Is honoured for them.

I too will something make
---And joy in the making;
Altho’ to-morrow it seem
Like the empty words of a dream
---Remembered on waking.