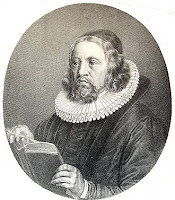 Thomas Kingo (1634—1703) is a Danish poet, hymnist and bishop. Considered the greatest Danish poet of his day, Kingo wrote both romantic and political verse, but is best remembered for his poems of faith.

He wrote a songbook (1674) using common tunes for home devotional use, which included a different tune for each day of the week, featuring a morning song, an evening song, and a versification of one of David's penitential psalms. Also included were songs such as "Fare, World, Farewell" sung by a soul longing for heaven:
-------Loveliest roses are stiffest of thorn,
----------fairest of flowers with blight may corrode,
-------withering heart under rose-cheek is worn,
----------for yet is Fortune so strangely bestowed
-------------Here our land rides
-------------on peril-tides,
-------Blissfulness only in heaven abides.
(Stanza 5; translated by David Colbert)

In 1699 the hymnal he was commissioned to compile appeared. Of the 297 hymns in The Ordained New Church Hymnal, 86 were by Kingo himself. Some of his most moving poems include his elegies on death. His poems often personify such concepts as death, sorrow and joy.

The following morning hymn was translated by the Rev. P. C. Paulsen.

The Sun Arises Now in Light and Glory

The sun arises now
In light and glory
And gilds the rugged brow
Of mountains hoary.
Rejoice, my soul, and lift
Thy voice in singing
To God from earth below,
Thy song with joy aglow
And praises ringing.

As countless as the sand
And beyond measure,
As wide as sea and land
So is the treasure
Of grace which God each day
Anew bestoweth
And which, like pouring rain,
Into my soul again
Each morning floweth.

Preserve my soul today
From sin and blindness;
Surround me on my way
With loving kindness.
Embue my heart, O Lord,
With joy from heaven;
I then shall ask no more
Than what Thou hast of yore
In wisdom given.

Thou knowest best my needs,
My sighs Thou heedest,
Thy hand Thy children leads,
Thine own Thou feedest.
What should I more desire,
With Thee deciding
The course that I must take,
Then follow in the wake
Where Thou art guiding.

Sandra Duguid grew up in western New York State. For twenty years she taught literature, composition and creative writing at colleges in the New York/New Jersey metropolitan area, and at East Stroudsburg University in Pennsylvania. She lives in New Jersey.

Her first poetry collection, Pails Scrubbed Silver, was published by North Star Press in 2013. In 2014 she contributed a poem to my blog The 55 Project.

John Leax has said of her poetry, "She asks her reader, 'Can you imagine?' and then with sure insight and shining words, she makes imagination possible."

This following poem is from Pails Scrubbed Silver, and first appeared in America. It was also awarded a prize in a contest from Calvin College.

There have been crucifixions, too,
in our town—innocents
gunned down in their doorways
or in school halls; or radiation's
black outlines, three crosses
marked a sister's chest: no wonder
we walk in quiet rage, musing.

And who, on this road, will join us,
seeming unaware
of the worst news in the neighborhood,
but spelling out the history of the prophets
and a future:
---Ought not Christ to have suffered these things
---and to enter into his glory?
Could our hearts still burn within us?

Will we ask the stranger to stay?
Break bread? And how
will our well-hammered and nailed
kitchens and bedrooms appear to us
when we understand who he is
just as he steals away? 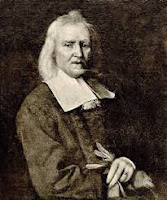 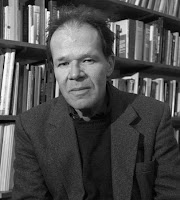 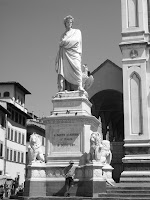 Dante Alighieri (1265—1321) is one of the world's most influential poets. He wrote his epic poem The Divine Comedy — which consists of Inferno, Purgatorio and Paradiso — while in exile from his home of Florence. It is an allegory, warning corrupt society to turn from evil, and to truly follow Christ. Rather than writing in Latin, Dante chose to write in an Italian centred on the Florentine vernacular; in so doing he did much to begin to unify the Italian language.

In July, my wife and I visited Dante's Florence, from which he was exiled for the last twenty years of his life. Ironically, the city of Florence for centuries has wanted to have his bones returned to them. The photograph shows me standing at the foot of Dante's statue in Piazza Santa Croce. The statue was erected in 1865 — 150 years ago — to mark the 600th anniversary of his birth.

The following is from Allen Mandelbaum's translation. It is spoken by those in Purgatory on behalf of those still living.

“Our Father, You who dwell within the heavens—
but are not circumscribed by them—out of
Your greater love for Your first works above,

praised be Your name and Your omnipotence,
by every creature, just as it is seemly
to offer thanks to Your sweet effluence.

Your kingdom’s peace come unto us, for if
it does not come, then though we summon all
our force, we cannot reach it of our selves.

Give unto us this day the daily manna
without which he who labors most to move
ahead through this harsh wilderness falls back.

Even as we forgive all who have done
us injury, may You, benevolent,
forgive, and do not judge us by our worth.

Try not our strength, so easily subdued,
against the ancient foe, but set it free
from him who goads it to perversity.

This last request we now address to You,
dear Lord, not for ourselves—who have no need—
but for the ones whom we have left behind.”