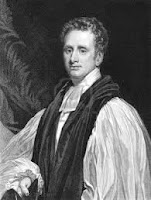 Reginald Heber (1783―1826) is an Anglican clergyman who served as a country parson for fifteen years before being appointed Bishop of Calcutta. While a student at Oxford University he distinguished himself as a poet, winning the Newdigate Prize ― which has since been won by such poets as Matthew Arnold, Oscar Wilde, and Andrew Motion. In 1812 Heber’s Poems and Translations appeared.

For me, his most familiar contribution is the great anthem "Holy, Holy, Holy! Lord God Almighty!" ― which, in the hymnal I remember from childhood, was honoured as hymn #1 and sung with great enthusiasm.

As Bishop of Calcutta, Heber took great interest in the people he served, studying the Tamil language, and using his authority to ordain as deacon the first native Indian to receive Holy Orders. In 1824 he began an extensive sixteen-month journey throughout India, which also brought him through what is now Bengladesh and Sri Lanka. He was critical of the disrespect shown by the British East India Company toward Indian people, and was concerned that few were promoted to senior positions.

Heber died suddenly in Trichinopoly, India, at the age of 42. His Narrative of a Journey Through the Upper Provinces of India: 1824–25 was published posthumously. A marble memorial was erected to him in St. Paul’s Cathedral. There is also a sculptured portrait of Heber in the inner courtyard of what was once the India Office, now the Foreign, Commonwealth & Development Office in London.

This poem is from The Poetical Works of Reginald Heber, D.D. Lord Bishop of Calcutta (1830, Frederick Warne).

Cold on His cradle the dew-drops are shining,
---Low lies His head with the beasts of the stall;
Angels adore Him in slumber reclining,
---Maker and Monarch and Saviour of all!

Say, shall we yield Him, in costly devotion,
---Odours of Edom and off'rings divine?
Gems of the mountain and pearls of the ocean,
---Myrrh from the forest or gold from the mine?

Vainly we offer each ample oblation;
---Vainly with gold would His favour secure:
Richer by far is the heart's adoration,
---Dearer to God are the prayers of the poor.