Horatio Gates Spafford (1828—1888) is famous for penning the words to the famous hymn “It Is Well With My Soul” which Philip Bliss later put to music. Spafford and his wife were close friends and supporters of the evangelist Dwight L. Moody. His booklet Waiting For The Morning and Other Poems was published by H.F. Revell (Chicago) in 1878.

Spafford’s tragic story is almost as well-known as the hymn. In 1873, his wife and four daughters were crossing the Atlantic aboard the steamship SS Ville de Havre when it collided with another vessel. Spafford’s wife, Anna, survived, but all four girls perished. According to another daughter who was born after this event, Horatio Spafford wrote the first four stanzas of “It Is Well With My Soul” on his ocean journey to meet his wife in England. The place where their daughters drowned was shown to him, which for us gives even greater power to the simile in the second line.

After returning to Chicago, the Spaffords became preoccupied with views that were inconsistent with those of their Presbyterian community. They left their church and held prayer meetings in their home. In 1881 they moved to Jerusalem to establish The American Colony there.

It Is Well With My Soul

When peace, like a river, attendeth my way,
When sorrows like sea billows roll;
Whatever my lot, Thou hast taught me to say,
It is well, it is well with my soul.

Though Satan should buffet, though trials should come,
Let this blest assurance control,
That Christ hath regarded my helpless estate,
And hath shed His own blood for my soul.
(Refrain)

My sin, oh the bliss of this glorious thought!
My sin, not in part but the whole,
Is nailed to His cross, and I bear it no more,
Praise the Lord, praise the Lord, O my soul!
(Refrain)

For me, be it Christ, be it Christ hence to live:
If Jordan above me shall roll,
No pain shall be mine, for in death as in life
Thou wilt whisper Thy peace to my soul.
(Refrain)

And Lord haste the day, when the faith shall be sight,
The clouds be rolled back as a scroll;
The trump shall resound, and the Lord shall descend,
Even so, it is well with my soul.
(Refrain)

Mary Oliver (1935—2019) is one of the best-selling contemporary poets in the United States. Her poems are far more often about the natural world — about birds and trees and marshes — than about people; even so she has written many poems about Jesus, and about Christian faith. Her style is accessible, and earnest. She once said in an interview, "One thing I do know is that poetry, to be understood, must be clear. It mustn't be fancy." She died of lymphoma on Thursday (January 17th).

Jewish Rabbi Jeffery Salkin wrote on the day of her passing, “Mary Oliver rejects logical explanation. She leaves room for uncertainty; in fact, she embraces it.” He quotes from one of her recent poems:
-----“I have refused to live
-----locked in the orderly house of
-----reasons and proofs.
-----The world I live in and believe in
-----is wider than that. And anyway,
-----what’s wrong with Maybe? ...”

The following poem was written much earlier. 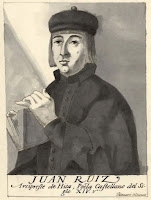 Juan Ruiz the Archpriest of Hita (c. 1283—c. 1350) is a Castilian poet and cleric, who wrote in his masterwork The Book of Good Love (1643) both verse about the spiritual love of God, and tales of men pursuing carnal love.

Little is known about the author, other than he was the Archpriest in the Spanish village of Hita, and that he was probably imprisoned, as his own work expresses.

The following poem was translated by Mack Singleton

Oh God, Who Father art and Son, and likewise Spirit Holy,
Of Blessed Virgin Mother born [and gentle Maiden lowly]—
The strength send us Thy name to praise in canticle
-----and rhyme!
Our shield and mantle be Thou, Lord, [through years
-----and days of time]!

May He Who heaven fashion did, and earth contrive and sea,
His light and grace abiding send [a lowly sinner,] me!
From shining verses’ pleasant sheaf then book will I devise
That men who hear its measures may both gladdened be,
-----[and wise].

O Lord most high, my Savior dear, Who mankind wrought
-----[from dross],
On Archpriest-this, thy strength bestow [to bear his
-----dreary cross].
Then book of courtesy I’ll write shall men’s hearts
-----all refresh;
Their souls ‘twill bring some profit, and some healing to
-----their flesh. 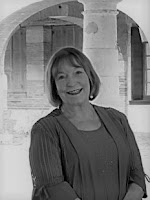 Barbara Crooker is a Pennsylvania poet who has just had her eighth poetry collection, The Book of Kells, published, as part of the Poiema Poetry Series from Cascade Books. It is, of course, inspired by the ninth century manuscript of the four Gospels known as The Book of Kells: “Ireland's greatest cultural treasure and the world's most famous medieval manuscript.”

She received a writing fellowship at the Tyrone Guthrie Centre, County Monaghan, Ireland. While in Ireland she meditated on pages of the Book of Kells in the Long Library, Trinity College, Dublin. She also remotely studied various pages which are now accessible online.

The Book of Kells is the second Barbara Crooker book I have been fortunate enough to edit with her. She has also had a poem recently appear in my new web-journal Poems For Ephesians, which is on the McMaster Divinity College website.

The following poem first appeared in Presence, and is from The Book of Kells.

Trinity College, the Book of Kells

In a dim room, the Gospel of John rises, pure gold
in the gloom: In the beginning was the word,
and the word was made flesh. John’s seated
on a throne of ultramarine, haloed
in plaits of light. He’s my tribe, a scribe,
notebook in one hand, pen in the other. Around him,
tattooed in vellum, interlace knots, no beginning
or end. The more I stare in this darkness,
the less I see, patterns too small for my retinae,
these aging eyes. Made from pigments of verdigris,
orpiment, lampblack and woad, is it a vision,
or merely a dream? Metalwork or woven ribbons,
this is the universe recast as pattern, and I draw in
a breath, Word of God on my tongue.