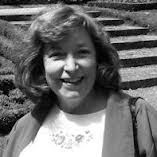 Barbara Crooker lives in Pennsylvania, and is the author of four poetry books; her most recent collection, Gold (2013), is the fifth book in the Poiema Poetry Series from Cascade Books. She has also published ten poetry chapbooks. Her poems have appeared widely in such publications as Beloit Poetry Journal and The Christian Century — have received awards such as the 2009 Paterson Award for Literary Excellence for her second collection, Line Dance — and have been heard on BBC Radio and on Garrison Keillor’s The Writers Almanac.

Important subjects in Crooker’s verse include reflections on the natural world, and ekphrastic poems inspired by visual artists, including Georgia O’Keefe, and Arshile Gorky. Many poems in Gold are drawn from Crooker’s experience with her mother’s decline and eventual death.

The following poem is from her new collection, Gold, which I had the privilege to edit for publication.

It’s not that I’m not trying
to love the world and everything
in it, but look, that includes people
who shoot up schools, not just the blue
bird in his coat of sky, his red & white vest,
or the starry asters speckling the field—
It has to include talk show hosts
and all their blather, men with closed
minds and hard hearts, not only this sky,
full of clouds as a field of sheep,
or this wind, pregnant with rain. Don’t
I have enough in my life; what is this
wild longing? Is there more to this world
than the shining surfaces? Will I be strong
enough to row across the ocean of loss
when my turn comes to take the oars?