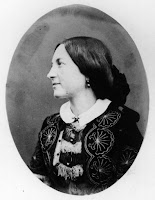 Christina Rossetti (1830—1894) is one of the greatest Victorian female poets — perhaps only second to Elizabeth Barrett Browning. Her first poetic triumph was the book Goblin Market and Other Poems (1862). She is also known for her children’s poems in Sing-Song (1872). She wrote six devotional studies, the last of which The Face of the Deep: A Devotional Commentary on the Apocalypse (1892) featured Rossetti’s verse-by-verse reflections on the Book of Revelation, and includes more than two hundred poems.

In the early 1870s she became seriously ill with Graves’ Disease. After her recovery she dedicated much of her attention to writing devotional prose. These writings reveal much of how she viewed the world as symbolic of spiritual truths; they also demonstrate her Christocentric view of scripture.

When asked about her poetic influences she wrote, “If any one thing schooled me in the direction of poetry, it was perhaps the delightful idle liberty to prowl all alone about my grandfather’s cottage-grounds some thirty miles from London.” Despite her love of nature, she lived most of her adult life in London.

Am I a stone, and not a sheep,
That I can stand, O Christ, beneath Thy cross,
To number drop by drop Thy blood’s slow loss,
And yet not weep?

Not so those women loved
Who with exceeding grief lamented Thee;
Not so fallen Peter weeping bitterly;
Not so the thief was moved;

Not so the Sun and Moon
Which hid their faces in a starless sky,
A horror of great darkness at broad noon —
I, only I.

Yet give not o’er,
But seek Thy sheep, true Shepherd of the flock;
Greater than Moses, turn and look once more
And smite a rock.

James Zoller is the author of three poetry collections, including Living on the Flood Plain (2008, WordFarm), and his brand-new collection Ash & Embers. He is Professor of Writing and Literature at Houghton College in New York State. Previously, he has taught at SUNY-Albany and at the University of New Hampshire. In 2011 he was Fulbright Professor of American Studies at Pusan National University in South Korea.

I am pleased to have served Jim, and his fine poetry, as the editor of this new book — which is part of the Poiema Poetry Series from Cascade Books. The following poem is from Ash & Embers.

One eyed, yes. And one eye
sees the visual organ music
in that rose of nine petals,
nine-point celestial compass, a fine
odd number though not seven, not perfection.

Random, the number of luck,
nine is another math entirely —
a trinity of trinities, three squared,
an image shaped illuminated leveraged,
the mandala, tool of spectral navigation.

So I pulled off its smiling head
its single-eyed smiley-face its life-filter its rose-
colored glasses, only to discover
a petri dish with random shapes and shards
vivid, odd, and polished glass 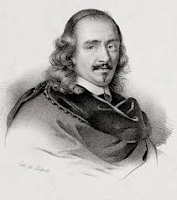 Wu Li (1632—1718) is best known as a painter — one of the six orthodox artistic masters in the early Ch’ing period. He remained loyal to the Chinese landscape tradition, despite having seen prints of European paintings.

His poetry is noteworthy for his boldness in seeking to establish a Chinese Christian poetry.

He converted to Christianity and joined the Jesuits in 1682, later becoming one of the first Chinese to be ordained as a priest (1688). He could have been well paid as a court painter, but instead he chose the life of an evangelist — often disguising himself as a peasant or fisherman — travelling from village to village in Jiangsu.

The following poem was translated by Jonathan Chaves.

Singing of the Source of Holy Church