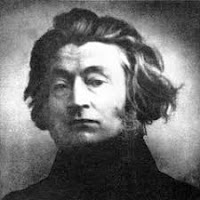 Adam Mickiewicz (1798—1855) — Poland's great Romantic poet — was greatly influenced by Lord Byron, Goethe and other Europeans. Christian faith is significant to his character, however in his writing it is often intertwined with his romanticism (combining elements of folk tales, chivalry, and tragic love) and his Polish nationalism.

In 1829 the poet visited Rome, and focussed on his religious practice — writing very little. In 1831 he wrote the third part of his earlier poem "Dziady" ("Forefather's Eve"). In this section he "views Poland as fulfilling a messianic role among the nations of western Europe by its national embodiment of the Christian themes of self-sacrifice and eventual redemption." This erroneous belief can distract from aspects of true Christian faith in his writing.

The Master of Masters

There is a master who has made a song
And tuned alike the heartbeats of a throng;
Like strings all elements of earth he binds
And o'er them guides the thunder and the winds;
And, playing ever with unwearied hand,
Sings to a world that will not understand:

A master who has colored blue the sky,
---And painted on the background of the wave,
And hewn colossal forms on mountains high
---And molded them of metal in the cave:
But all the knowledge that the world has brought
Cannot explain the meaning of his thought.

There is a master with a tongue divine
---Who has revealed the power of God o'er man;
He has interpreted with voice and sign
---The record of his works since time began:
They called him God in days that went before;
Today they scorn him, worshiping no more.

O earthly artist! what are thy small deeds?
Thy feeble carvings and thy books and creeds?
Dost thou complain that some among the throng
Like not thy picture, and sing not thy song?
Then gaze upon the Master, and be proud,
Thou Son of God, rejected by the crowd!