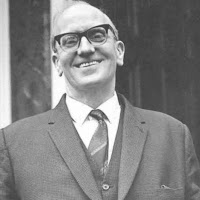 Pennar Davies (1911―1996) is a Welsh poet who in his latter, most-productive years exclusively wrote in the Welsh language. He was educated at University of Wales, Oxford, and Yale; he became a Congregational minister in Cardiff, and subsequently a professor of Church History. He took on the name Pennar, which is a stream running through Mountain Ash where he was born. He authored four poetry collections and four further books. His hymn “All Poor Men and Humble” (translated by Katharine Emily Roberts) appears in eleven hymnals. There are also several biographical books available about him, including a biography by Dawn Dweud, Saintly Enigma by Ivor Thomas Rees, and his autobiography Diary of a Soul.

He was a member of the separatist political party Plaid Cymru, became the Literary Editor for The Welsh Nationalist paper where he published work by R.S. Thomas, and was a significant advocate for Welsh-language broadcasting.

When I Was a Boy

When I was a boy there was a wonderous region
the other side of the mountain:
the sun livelier there, in its prime;
the moon gentler, its veil of enchantment
resting chastely on hill and dale;
the night like a sacrament,
the dawn like young love,
the afternoon like sliding on the Sea of Glass,
the evening like a respite after mowing;
the faces of ordinary folk like china dishes
and their voices like the soliloquy of countless waters
between the source and the sea,
and the people sons and daughters of old,
princes and countesses in the court;
and all the lines of nature, thought, society
and talent and will and sacrifice
and the saving and the wretchedness and the peace,
all the lines of venture, claim compassion,
meeting at eye level there
in an unvanishing vanishing point
called Heaven
and all on the other side of the mountain
in Merthyr, Troed-y-rhiw and Aber-fan
before I crossed the mountain
and I saw.

Brad Davis is the author of three poetry collections: Opening King David (2011), Still Working It Out (2014), and his new book Trespassing On the Mount of Olives (Poiema/Cascade, 2021). Similar to how his first book consisted of poems in conversation with the Psalms, his new book’s poems are in conversation with the gospels. He has taught creative writing at the College of the Holy Cross, Eastern Connecticut State University, The Stony Brook School, and Pomfret School, where he served as school chaplain.

Marjorie Maddox has said of this new collection, “…Through persona poems and first-person narratives, the contemporary and biblical intersect with insight and humor. . . . What follows are spiritual and social examinations: ‘How to clear out a self from a self,’ how to protect the environment, how to face doubt and mortality, and, ultimately, how to ‘do whatever he tells you,’ even if that means, according to Davis, writing poems. Thank God for the latter.”

I am honoured to be the editor of the Poiema Poetry Series, and to have worked with Brad Davis on both Still Working It Out, and Trespassing On the Mount of Olives.

The following poem first appeared in Ekstasis, and is from his new poetry book.

The Generative Influence of Q on John’s Gospel

The fragment is on the mark.
Whoever wrote it down got it right,
and I should know.
From a boat offshore,
my younger self watched it happen:
the crowd pressing upon the Teacher
as he taught on the beach;
he commandeering Peter’s boat
and telling him to put out into deep water;
we rolling our eyes
when he instructed Peter to let down his net,
yet then having to help him land
that crazy haul of fish;
and finally back on the beach, the Teacher
announcing, From now on, you will catch men.
Ever since it was entrusted to me,
I have treasured this fragment,
holding it as first among the other fragments
I keep rolled in a scrap of leather.
And there’s a new reason I hold it dear.
Early last Sabbath, the rains dampening
my eagerness for eldership here in Ephesus,
I unrolled the fragment
to refresh my sense of commissioning—
you will catch men—
when suddenly the words
turned themselves inside out
and I became dizzy, like that day
in the upper room with the Spirit-fire.
Suddenly the crowd on the beach
listening to Jesus teach the word of God
became a crowd on a beach
listening to God.
I felt myself melt, as if into a glorious light.
Then later in the day words occurred to me—
In the beginning was the Word,
and the Word was—
along with a compulsion
to write them down
and follow them with other words.
And it was as though I were once again
following Jesus up some rocky path
between small towns on the way to Jerusalem.
I’m telling this to all of you
because the idea these words convey
will be called blasphemous.
I may suffer for having written them.
But I know and trust their source,
and when I’m done they must
be sent around to all the Teacher’s friends.
Which makes me nervous
how even they will receive them,
for none of the others have spoken as plainly
of the Teacher in this way—
as the great I AM. So I have awakened you,
the moon still bright above the city,
because I want you to sit with me and pray
as I write what I will write.
You know how tired I become by early afternoon,
and how I have needed your help
shepherding our little flock here in Ephesus.
Well, now I will need you even more
to help complete the new work. Please,
someone bring me my pen, ink, and parchment.

Elizabeth Barrett Browning (1806―1861) is one of the nineteenth century’s greatest poets. She was outspoken against many abuses of human rights ― including against slavery, and the reliance upon slave labour on her family’s Jamaican sugar plantations. She also boldly expressed her Christian faith, and spoke out against issues such as child labour, even though these were not popular with many readers.

Her 11,000-line epic poem Aurora Leigh (1856) ― which is described as a novel in blank verse ― tells the story of the young woman, Aurora, who aspires to be a poet. One important focus of the story is the difficulty for women to have artistic ambitions, due to the restrictive expectations of women’s roles, and limited opportunities for education. Browning saw it as the most mature of her works. The critic John Ruskin called Aurora Leigh the greatest long poem of the nineteenth century.

The opening setting for Aurora Leigh is Florence, where Elizabeth and her husband Robert Browning primarily lived from 1846 until her death.

And truly, I reiterate, . . nothing's small!
No lily-muffled hum of a summer-bee,
But finds some coupling with the spinning stars;
No pebble at your foot, but proves a sphere;
No chaffinch, but implies the cherubim:
And,–glancing on my own thin, veined wrist,–
In such a little tremour of the blood
The whole strong clamour of a vehement soul
Doth utter itself distinct. Earth's crammed with heaven,
And every common bush afire with God:
But only he who sees, takes off his shoes,
The rest sit round it, and pluck blackberries,
And daub their natural faces unaware
More and more, from the first similitude.

Jacopone da Todi (ca. 1230―1306) is an Italian poet and Franciscan friar. The existence of hundreds of manuscripts of his Laud, point to the popularity of these poems. They were written in his Umbrian dialect of Italian. Along with many beautiful poems of rich faith, there are some expressing more extreme views, including glorifying the notion of madness for the sake of Christ. It is commonly thought that Jacopone also wrote the celebrated Latin poem “Stabat Mater Dolorosa,” although this is still in question.

He wrote many satirical poems, critical of corruption within the Catholic Church. He believed in the necessity of ascetic poverty for priests, and was critical of Pope Boniface VIII, whom he did not consider to be the legitimate pope. He was excommunicated and jailed, although later released and reinstated during his seventies by Pope Benedict XI.

Irish poet Pádraig J. Daly has just sent me a copy of the very enjoyable book, The God-Madness (2008, Dedalus Press), his translations from the Italian of several of Jacopone da Todi’s particularly devotional laud. The following poem is from this book.

LOVE O LOVE DIVINE,
Why have you laid siege to me?
You have fallen for me madly and cannot let me go.

From five directions you besiege me:
Through sight and hearing, taste and touch and smell.
If I emerge, I am caught: I cannot hide from you.

If I go out through my eyes, all I see is Love,
Depicted in every form, in every colour,
Reminding me over that I must live still with you.

If I go through the gate of hearing,
What does sound tell me? Sir, only of you.
I cannot exit here, for all I hear is bitter.

I cannot go through taste, since what I savour proclaims you:
Love, Love Divine! Love, Hungering Love,
You have hooked me that you might rule me!

If I go through the gate of smell,
Every creature has scent of you.
return wounded, tangled in every odour.

If I go through the gate they call touch,
I trace you in every creature;
It is madness, Love, to try to escape you.

Love, I try to flee,
Not willing to yield my heart:
But I have lost, and cannot find, myself.

If I see evil in anyone, fault or weakness,
You transform me into them and make my heart heavy.
Love I immeasurable, who is it you choose for loving?

Take me, Dead Christ; haul me from sea to sand,
Where I may grieve to see you so full of wounds,
And why it is you have been wounded? Only that I be healed.