Miklós Radnóti (1909—1944) is a Hungarian poet who developed his artistic voice between the wars, studying Hungarian and French literature at the University of Szeged. He was active in Budapest’s avant-garde literary scene. As the days grew politically darker, his second poetry collection, Song of the New Shepherds (1931), was banned — for which he could have been imprisoned. He and his wife travelled to France many times during the 1930s, and they converted to Catholicism.

During WWII, because of his Jewish background, he was drafted three times for forced labour. The third time this happened he had been working in the Yugoslavian copper mines, and was on a forced retreat from Russian forces. In a weakened state, and unable to continue, he was shot; his body was dumped in a mass grave. When the grave was exhumed a year later, his notebook — containing his final poems — was discovered. Miklós Radnóti has been called one of the most significant poetic witnesses to the Holocaust.

The following is from Radnóti’s posthumous collection Forced March, translated by Clive Wilmer and George Gömöri. Here “the poet” is speaking with the prophet Nahum who has just spoken of how “more than of old, today, sin multiplies”.

To the slaughter nations scramble.
And the soul of man is stripped bare, even as Nineveh.
What use had admonitions? And the savage ravening locusts
In their green clouds, what effect? Of all beasts man is the basest.
Here, tiny babes are dashed against walls and over there,
The church tower is a torch, the house an oven roasting
Its own people. Whole factories fly up in their smoke
The street runs mad with people on fire, then swoons with a wail,
The vast bomb-bays disgorge, the great clamps loose their burdens
And the dead lie there, shrivelled, spattering city squares
Like a herd’s dung on the pasture: everything, once again,
Has happened as you foretold. What brings you back here, tell me,
To earth from ancient cloud-swirl? 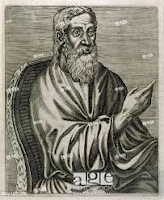 Clement of Alexandria (c. 150—215) is a significant philosopher of the early church. In about 190 he began teaching his own school of thought, which centred on the reasonableness of the Christian faith. He wrote three books: Exhortation to the Greeks, Instructor, and Miscellanies. Clement’s “new philosophy” was actually Biblical Christianity aimed at correcting gnostic heresies.

Clement was one of the first leaders to speak up in favour of Christians using visual art in their worship. He suggested, "Let our emblem be a dove, or a fish, or a ship running before the wind, or a musician's lyre, or a ship's anchor. And if there be a fisherman, he will remind us of an apostle, and little children being drawn up out of the water."

The following is considered by some to be the oldest Christian hymn, other than texts from scripture; it was translated into English by F. Bland Tucker.

Jesus, our mighty Lord,
our strength in sadness,
the Father's conquering Word,
true source of gladness;
your name we glorify,
O Jesus, throned on high;
you gave yourself to die
for our salvation.

Good shepherd of your sheep,
your own defending,
in love your children keep
to life unending.
You are yourself the Way:
lead us then day by day
in your own steps, we pray,
O Lord most holy.

Glorious their life who sing,
with glad thanksgiving,
true hymns to Christ the King
in all their living:
all who confess his Name,
come then with hearts aflame;
the God of peace acclaim
as Lord and Savior.

Email ThisBlogThis!Share to TwitterShare to FacebookShare to Pinterest
Labels: Clement of Alexandria

Dylan Thomas (1914—1953) is the best known of all Welsh poets. He grew up in a Wales that had undergone an evangelical revival in 1904—1905 that had transformed the entire culture. His father was an atheist who nevertheless constantly ranted against God, while his mother was a devoted nonconformist chapel-goer.

I have long wondered about including a post about Dylan Thomas here, although I doubt he was truly a Christian. Even so, he was so God-haunted, so influenced by the Bible and hymns, and he wrote so many poems which clearly express a Christian faith, that I decided — at the very least — he speaks profoundly of faith in God.

In his book Dylan Thomas; Dog Among the Fairies, Henry Treece concludes that in Thomas's poem "Vision and Prayer" — "The poet has openly accepted God's love and has rejoiced in his acceptance. . . . This poem ends in a burst of confessional self-abnegation very reminiscent of Francis Thompson's ‘Hound of Heaven’." Treece also says, "his successive poems have testified . . . to his acceptance of religion and his need for prayer."

Many would disagree, even though, one of his closest friends, the poet Vernon Watkins, was clearly a Christian — and Dylan Thomas’s favourite poem, was John Milton’s “On The Morning of Christ’s Nativity.” Perhaps what this most proves is how difficult it is for us to truly understand another human being.

Dylan Thomas’s drunkenness and immoral behaviour was enough to keep him from receiving a plaque in Poets’ Corner of Westminster Abbey. This absence was amended in 1982 when US President Jimmy Carter remarked to the Dean, “You put him in here. And I will pray for him.”

The following poem was one that Vernon Watkins convince Thomas to include in his collection Twenty Five Poems.

And Death Shall Have No Dominion

And death shall have no dominion.
No more may gulls cry at their ears
Or waves break loud on the seashore;
Where blew a flower may a flower no more
Lift its head to the blows of the rain;
Through they be mad and dead as nails,
Heads of the characters hammer through daisies;
Break in the sun till the sun breaks down,
And death shall have no dominion. 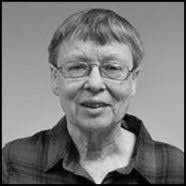 Janet McCann has taught creative writing in the English Department of Texas A&M University for more than 45 years. The most recent of her numerous poetry collections is The Crone at the Casino (Lamar University Press, 2014).

I met her this February at the Windhover Writers Festival at University of Mary Hardin-Baylor in Belton, Texas. I was able to express to her how influential the anthology Odd Angles of Heaven (1994, Harold Shaw Publishers) — which she’d edited together with David Craig — had been for me as I was developing as a poet, and how it is a significant forerunner to my anthology The Turning Aside: The Kingdom Poets Book of Contemporary Christian Poetry.

She and David Craig also went on to publish two further poetry anthologies — Place of Passage (2000) and Francis and Clare in Poetry (2004).

My friend the scholar-birdwatcher
is dying, after a quiet regular life
of Milton and birds, and if I could

imagine him a farewell, it would be this:
to look out into the small yard
he tended for forty years, to where

he placed the bird houses, the martin
house and the hummingbird feeder,
just in time to see a sweep of air

curve in and take form, the great arctic gyrfalcon
not on his life list, there on the sill,
beak, feathers and pinions

and final knowledge, Adam’s homecoming
after the story’s end, better than Eden.
May he leave in his hand a feather, that his wife