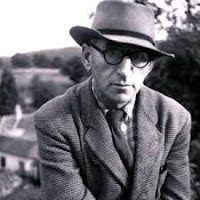 Patrick Kavanagh (1904—1967) is an Irish poet from the farm country of County Monaghan. He was self-educated, and when he moved to Dublin, did not fit in with its literary culture. His early poetry was not exceptional, and his first critical success was his biographical novel The Green Fool in 1938. It exploited the romantic image of the peasant poet, which his contemporaries idealized, but did not respect. He soon desired to distance himself from this stereotype.

He countered this with the long, narrative poem The Great Hunger (1942) which many critics feel is his finest creation. It presents an anti-sentimental view of rural Ireland, and the despair of being tied to an unproductive farm.

For many years Kavanagh supported himself through journalism, developing a sarcastic bite, which he aimed at the Irish cultural elite. He lost a lot of energy, and nearly died of cancer, through these combative years.

In 1959, a former opponent helped him to be posted to the faculty of English at University College, Dublin. Here he became a popular lecturer, and chose a path of forgiveness and contentment. The sonnets in his collection Come Dance With Kitty Stobling (1960) were praised by Richard Murphy in the New York Times Book Review, as "a lyrical celebration of love fulfilled in man by God."

The following poem is all the more powerful when you know the struggle Patrick Kavanagh faced in becoming a significant poet.

Having confessed he feels
That he should go down on his knees and pray
For forgiveness for his pride, for having
Dared to view his soul from the outside.
Lie at the heart of the emotion, time
Has its own work to do. We must not anticipate
Or awaken for a moment. God cannot catch us
Unless we stay in the unconscious room
Of our hearts. We must be nothing,
Nothing that God may make us something.
We must not touch the immortal material
We must not daydream to-morrow’s judgement—
God must be allowed to surprise us.
We have sinned, sinned like Lucifer
By this anticipation. Let us lie down again
Deep in anonymous humility and God
May find us worthy material for His hand.