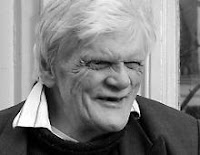 John Heath-Stubbs (1918—2006) is an English poet, who was almost completely blind right from childhood. He didn’t see this as a hindrance, but once said, “As a poet, I have found that blindness actually tends to stimulate the imagination.”

He was one of the editors (and one of the eight poets) of Eight Oxford Poets (1941) which helped establish his career. Later, he taught at various universities, including Leeds and Merton College, Oxford. Among his accomplishments are translations of poetry from Latin, Greek, Persian, Italian and French — and significant awards, including the Queen’s Gold Medal for poetry in 1973, and an OBE in 1989.

Heath-Stubbs often explored his Christian faith within his poems — and expressed his interest in “the reaffirmation of orthodox religious themes in the poetry of T.S. Eliot and Charles Williams and others.”

The following poem was set to music in 1966 by composer Peter Dickinson.

Shepherds, I sing you, this winter’s night
Our Hope new-planted, the womb’d, the buried Seed:
For a strange Star has fallen, to blossom from a tomb,
And infinite Godhead circumscribed, hangs helpless at the breast.

Now the cold airs are musical, and all the ways of the sky
Vivid with moving fires, above the hills where tread
The feet—how beautiful!—of them that publish peace.

The sacrifice, which is not made for them,
The angels comprehend, and bend to earth
Their worshipping way. Material kind Earth
Gives Him a Mother’s breast, and needful food.

A Love, shepherds, most poor,
And yet most royal, kings,
Begins this winter’s night;
But oh, cast forth, and with no proper place,
Out in the cold He lies!