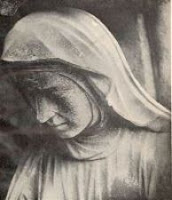 Hadewijch (c.1200―c.1260) is a poet and Christian mystic who lived in what is now Belgium. She was head of a group of young beguines ― women who lived a life devoted to God in communal houses, although not as a religious order.

It is believed she came from a wealthy family, because her writing demonstrates a wide knowledge of theology, languages, and literature ― including French courtly poetry.

The following English version was translated by Columba Hart. The Latin, as carried over from the original Dutch poem, basically means ― "Ah, if I wish you a thousand times happiness, it would not be enough."

God Must Give us a Renewed Mind (from Vale Millies)

Email ThisBlogThis!Share to TwitterShare to FacebookShare to Pinterest
Labels: Hadewijch

Sarah Law is a London poet who grew up in Norwich and once worked in the Julian Centre, next door to St Julian's Church. Her natural interest in the medieval anchoress Julian of Norwich was a starting point for further investigations into Christian mystics.

She is the author of several poetry collections, including her sixth: Thérèse (2020, Paraclete) in which she shares her poetic reflections on the life and writings of the Carmelite nun Thérèse of Lisieux (1873―1897). Marjorie Maddox calls the book “A biography-in-verse that brims with beauty, pain, insight, and humility…”

Sarah Law teaches at the Open University, and is editor for the online journal Amethyst Review, which focuses on new writing engaging with the sacred. Her new novel Sketches from a Sunlit Heaven is soon to appear from Wipf & Stock Publishers.

Grace drifts down like dust
over the soul’s rough rocks,

settles in its crevices, scintilla
where even the light is blocked –

grace like fine flour sifting through
a grille to the lumpen heart.

that motes are always falling –
each particle is gentler than confetti,

hallowing the human, the unready;
its glinting traces bless us unawares.

Grace is manna for an outpost life,
is unconditional and borderless –

there is only the reception of its calling,
all I can do is raise my empty hands.

Vedanyakam Sastri (1774―1864) is an Indian poet and lyricist who served as court poet in the palace of Serfoji II ― who was the ruler of the Bhonsle dynasty of the Maratha principality of Tanjore (now known as Thanjavur). His name is alternately spelled Vedanayagam Sastriar as well. He was born into a Catholic family, but embraced Protestantism at the age of twelve. Sastri’s poetry became very popular, however, many missionaries felt he went too far to contextualize Chrsitanity to the Indian culture.

His poetry draws together Christian imagery with traditional Tamil literary structures. He performed dramatic versions of stories from the creation of the world right through to the return of Christ. Some of his works include The Garland of Prayer, The Drama of the Crippled Hero of Wisdom, and Bethlehem Kuravanci.

After years of respected service to the king, several powerful individuals in the palace showed intolerance toward Christianity. Sastri, however, remained outspoken about his faith, while showing respect for the faith of others.

The United Theological College in Bangalore, preserves some of the original manuscripts of his writings, as part of their collection of ancient palm-leaf manuscripts and rare books.

Dragan Dragojlović is a Serbian poet of the Orthodox Christian faith. He has served in various official roles for the Serbian government, including as ambassador to Australia from 1997 to 2001.The title of his 2017 collection Patriarch’s Ladders, refers of the ladder to heaven, and honours the late Patriarch Pavle of the Serbian Orthodox Church.

Dragojlović’s best known book, in English translation, Death’s Homeland (2008) is a collection of anti-war poems. He finds people’s religious motivations for war particularly appalling, and has emphasized “the tragic enigma of how people who believe in a loving God can murder each other…” At the Ecumenical Dialogue on Reconciliation in Belgrade in 1996 ― in his alternate role as Minister of Religions in the Serbian government ― he commented on the religious nature of the war in the former Yugoslavia: “Not that many combatants were devout believers, but they made little if any distinction between national and religious identity, nor did their religious communities encourage them to make such a distinction.”

Dragojlović has translated contemporary Chinese poet Zhao Lihong into Serbian, while his own Book of Love has been translated into Chinese.

If I Succeed in Producing a Poem

If I succeed in producing a poem
then I will not rue missing out the exhibition
of inanimate objects in sfumato technique
that brings our inner and painful side
closer to the light.

A poem need not be
similar to some paintings,
a limitless geometry of inexpressible beauty
born out of a marriage
of mutually remote words,
like the blending of colours on the canvas,
or like distant stars
that engender the sky
disclosing fragments of the principle
controlled by God.

Despite his faltering pen,
despite his self-consuming thoughts,
a poet touches upon the intangible
contained in each endless moment
as occasionally happens
on a painter’s canvas.

Essentially, the painting and the poem
are two forms of the same language
that can at times convey Perfection.

Humility forbids us to wonder
what God’s judgment of that would be.