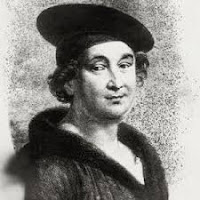 François Villon (1431—1463) is a French poet — the best known of the middle ages — who was also a thief, a brawler, and a murderer. His most famous work is The Testament (1461) which he wrote while imprisoned for some unknown crime. He was familiar enough with Christian concepts to write the following (rather tongue-in-cheek) lines about the Bishop whose prison he was in,

-------But since the Church says we should pray
-------For those who hate us, I am leaving
-------To Him who said, "I shall repay,"
-------The last, eternal reckoning.
It is true that Villon often expresses regrets for his wasted life, and repents of his sins, but his repentance doesn't appear to bring any change in his behaviour.

Was he ever able to embrace Christian discipline, to truly turn and follow God? His circumstances at the time of the following poem suggests, he hadn't yet, but perhaps this was that moment. I pray to the God who exists outside of time that Villon may have truly found salvation.

His work has been translated by many, including Dante Gabriel Rossetti, and Richard Wilbur, although the translator of the following poem is unknown. "Ballad of the Gibbet" is an epitaph for himself and those with him, who expected they were about to be hanged. It is believed to have been written in late 1462, when Villon was in the Châtelet prison under sentence of death.

Ballad of the Gibbet

Brothers and men that shall after us be,
Let not your hearts be hard to us:
For pitying this our misery
Ye shall find God the more piteous.
Look on us six that are hanging thus,
And for the flesh that so much we cherished
How it is eaten of birds and perished,
And ashes and dust fill our bones' place,
Mock not at us that so feeble be,
But pray God pardon us out of His grace.

Listen, we pray you, and look not in scorn,
Though justly, in sooth, we are cast to die;
Ye wot no man so wise is born
That keeps his wisdom constantly.
Be ye then merciful, and cry
To Mary's Son that is piteous,
That His mercy take no stain from us,
Saving us out of the fiery place.
We are but dead, let no soul deny
To pray God succour us of His grace.

The rain out of heaven has washed us clean,
The sun has scorched us black and bare,
Ravens and rooks have pecked at our eyne,
And feathered their nests with our beards and hair.
Round are we tossed, and here and there,
This way and that, at the wild wind's will,
Never a moment my body is still;
Birds they are busy about my face.
Live not as we, nor fare as we fare;
Pray God pardon us out of His grace.

Prince Jesus, Master of all, to thee
We pray Hell gain no mastery,
That we come never anear that place;
And ye men, make no mockery,
Pray God pardon us out of His grace.

Catharina Regina von Greiffenberg (1633—1694) is an Austrian poet who is now regaining recognition for her legacy. She published collections of poetry in 1672, 1675, and 1678. As Protestants in Catholic Austria, her family experienced persecution under the Habsburg dynasty. Even so, as she gained popularity as a poet, she was bold enough to attempt to persuade Holy Roman Emperor, Leopold I, to adopt her Lutheran views.

Burl Horniachek, who recommended I should post about Catharina Regina von Greiffenberg, mentioned that Canadian poets Joanne Epp, Sally Ito, and Sarah Klassen have been working on new translations of her poetry. I look forward to learning more about this as the work unfolds.

The following is from Meditations on the Incarnation, Passion, and Death of Jesus Christ translated by Lynne Tatlock. The image the poem refers to is reproduced below.

Explanation of the Frontispiece

Blot out the entire world. The tablet of my thoughts
be wiped clean. Let nothing remain but Jesus Christ.
I will stand for nothing else. There shall be no thing
within remembrance's bounds but Him who is all.
Lust for knowledge may inspire many lovely things;
Jesus alone restores me, more than can vast knowledge.
However the world may lust for money, art, wisdom,
I want and know nothing but the strength of His cross.
May gall and vinegar's sponge blot out all vanity.
Let the crucified one alone stay in my mind.
How far Totality, when alone can outspread
and change everything we clearly see herein
I want this sum of all things alone in my mind. 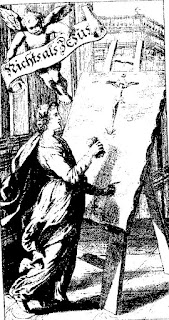 Anya Krugovoy Silver is a prolific poet who teaches at Mercer University in Macon, Georgia. She was named the Georgia Author of the Year/Poetry for 2015. Her two most-recent books are From Nothing (2016) — which like her first two collections is published by Louisiana State University Press — and the recently released Second Bloom, which I assisted with as editor for the Poiema Poetry Series (2017, Cascade Books).

She is also one of the poets featured in my anthology The Turning Aside: The Kingdom Poets Book of Contemporary Christian Poetry — (available here) and through Amazon. Second Bloom is also available on either site.

The following poem is from Second Bloom, and first appeared in Saint Katherine Review.

It was for you, Maria Skobsova,
that Mozart wrote his Requiem.
Bolshevik nun, instead of celebrating
the funeral of Christ, you walked
into the gas chamber at Ravensbrück
in place of another woman.
Instead of trailing the coffin
around the church, you claimed
a place in the line entering hell.
It was for you, Maria Skobsova,
that Mozart fainted in the writing
of his mass, Let them, Lord, pass.
All work remains unfinished:
the composer’s delirious lines,
the forging of baptismal certificates
in your Parisian convent, the censing
of the church on Holy Saturday.
Instead of incense, fumes of Zyclon B
haloed the shorn heads of the dying.
No beaded shrouds for Mozart’s
common grave, for your grey smoke.
Give thanks to the Lord, we sing.
for he is good: for his mercy endures forever.

Robert Siegel (1939—2012) is one of the first poets whose work appeared as part of the Poiema Poetry Series. His collection Within This Tree of Bones (2013, Cascade Books) is his final book, his final selected collection, and the only book where the poems he was writing as he was nearing death appear. I am glad that, even though I did not know that he was battling cancer at the time, I encouraged him to add several more new poems to the collection than he had originally planned. I want to post again about Bob and his fine poetry, because his incredible talent and the beautiful legacy of Within This Tree of Bones has not received the attention it deserves; at least not yet.

This blog post is one small way I am seeking to encourage others to read Robert Siegel. Another is that I have included half a dozen of his poems in the anthology The Turning Aside: The Kingdom Poets Book of Contemporary Christian Poets — (available here) and through Amazon.

As John Wilson, who was editor for Books & Culture, has eloquently said: "Robert Siegel is one of my favorite poets, and I'm frustrated that so many readers are unfamiliar with him. This handsome 'new and selected' volume is an ideal introduction to his work, and I may just resort to hawking it on street corners, like those ragamuffin kids peddling papers in old movies. You want the latest news? Read Within This Tree of Bones."

She floated before him like a summer cloud,
pink and white through his sweat and then lay down
squealing, by her sucklings, a teat for each mouth.
The husks caught in his throat. If he'd only known
the pigs would have it better than he, he never...
He, ripe offal, stuck in the world's latrine!
—so he told himself over and over and over
and over again. With tears came a keen

ache in his chest. Next day he started home.
He tried to stop his thoughts, lethally busy,
but at night yearned for the slops and warmth of the barn,
the hogs' contented grunting and homely stink. Alone,
he knew he'd failed beyond all hope of mercy.
He didn't even see his father till wrapped in his arms.