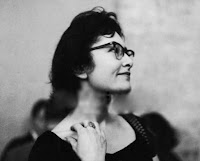 Denise Levertov (1923—1997) is an American poet, who was born in Britain. She received many awards, including the Robert Frost Medal, and the Conference on Christianity & Literature Lifetime Achievement Award in Poetry. Most of her 24 poetry collections were published through New Directions. She taught at several universities including Brandeis, MIT, Tufts, and Stanford. In 1989 she moved to Seattle, and taught part time at University of Washington.

Although her father was an Anglican priest, she was an agnostic up until her conversion to Christianity in 1984 ― which she described as a gradual move from regretful scepticism to Christian belief. In a 1990 essay she referred to the work of the artist, as work that "enfaiths," and said the imagination is “the chief of human faculties," and it must be "by the exercise of that faculty that one moves toward faith, and possibly by its failure that one rejects it as delusion."

The following poem is from The Stream & the Sapphire (1997), a collection of her poems on religious themes.

What the Fig Tree Said

Literal minds! Embarrassed humans! His friends
were blurting for Him
in secret: wouldn’t admit they were shocked.
They thought Him
petulant to curse me!—yet how could the Lord
be unfair?—so they looked away,
then and now.
But I, I knew that
helplessly barren though I was,
my day had come. I served
Christ the Poet,
who spoke in images: I was at hand,
a metaphor for their failure to bring forth
what is within them (as figs
were not within me). They who had walked
in His sunlight presence,
they could have ripened,
could have perceived His thirst and hunger,
His innocent appetite;
they could have offered
human fruits—compassion, comprehension—
without being asked,
without being told of need.
My absent fruit
stood for their barren hearts. He cursed
not me, not them, but
(ears that hear not, eyes that see not)
their dullness, that withholds
gifts unimagined.