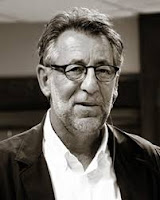 Scott Cairns is the author of nine poetry collections ― the most recent include Anaphora (2019), Slow Pilgrim: The Collected Poems (2015), and Idiot Psalms (2014) which were all published by Paraclete Press. In 2007 his spiritual memoir Short Trip to the Edge (Harper San Francisco) first appeared; Greek and Romanian editions have since been published, as well as an expanded English edition. He is now the Director of the Seattle Pacific University Low-Residency MFA Program in Creative Writing.

In a recent interview with Saint Katherine Review, Scott Cairns said, “[I]n order to see anything, you have to really look. You have to pour over the words. You have to pour over the landscape. You have to ‘attend’, as we’re often invited to do during the liturgy. So in my own vocation as a poet, I have to be a lover of language and a truster of language that through the Holy Spirit it will lead me into seeing something I hadn’t anticipated. A vocation is not so much something we’re called to do to serve God. We’re called into a vocation, and in that vocation, if we pursue it with due diligence, that’s where the Lord blesses us further. So it’s not something we do for him so much as it is what he gives us to do that’s worthwhile.”

The following poem is from his new collection, Anaphora.

Beneath his breath
the zealot says
thank God I am
not like this man,
the Pharisee
who thought to scorn
the publican.