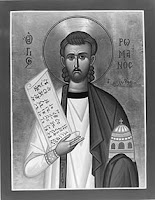 Romanos the Melodist lived and wrote during the sixth century. He was born in Syria, later lived in Beirut, and eventually in Constantinople. Little is known about him, since he’s only mentioned by three ancient sources.

According to legend, the following poem came to him as the result of a dream in which Mary gave him a scroll which she commanded him to eat. Of poems written in the kontakion form, the oldest, dateable ones were written by Romanos. As many as 85 kontakia are attributed to him, although some of these are probably not his.

The following poem consists of 24 stanzas, three of which are included here. (The complete kontakion may be found here.) The dialogue is between Mary and the magi. In stanza 12 Mary is explaining that Joseph is a witness to all of the events of Christ’s incarnation.

Kontakion on the Nativity of Christ

1
Bethlehem has opened Eden, come, let us see;
we have found delight in secret, come, let us receive
the joys of Paradise within the cave.
There the unwatered root whose blossom is forgiveness
-----has appeared.
There has been found the undug well
from which David once longed to drink.
There a virgin has borne a babe
and has quenched at once Adam’s and David’s thirst.
For this, let us hasten to this place where there has
-----been born
----------a little Child, God before the ages…

12
“He proclaims clearly all he has heard.
He declares openly all that he has seen
in heaven and on earth:
the story of the shepherds, how beings of fire sang
-----praises with ones of clay,
that of you, magi, how a star hastened before you,
lighting your way and guiding you.
And so, leaving aside all that you said before,
now recount to us what has befallen you.
Where have you come from, how did you understand
-----that there had appeared
----------a little Child, God before the ages?”…

24
“Save the world, O Saviour. For this you have come.
Set your whole universe aright. For this you have shone
on me and on the magi and on all creation.
For see, the magi, to whom you have shown the light of
-----your face,
fall down before you and offer gifts,
useful, fair and eagerly sought.
For I have need of them, since I am about
to go to Egypt and to flee with you and for you,
my Guide, my Son, my Maker, my Redeemer,
----------a little Child, God before the ages.”