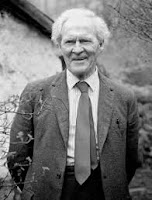 R.S. Thomas (1913―2000) was born in Cardiff. He spent most of his career as an Anglican priest among rural farmers in the Welsh hill country. The people of those parishes, and the hill country itself, loom large in his poetry. At the close of the century, he was seen as the most significant of all contemporary Welsh poets.

He had a dislike of modern material conveniences, which he felt distracted from the spiritual and from community. He and his wife Mildred married in 1940, and were together until her death in 1991.

His verse is featured in The Turning Aside: The Kingdom Poets Book of Contemporary Christian Poetry (Cascade Books).

They came over the snow to the bread’s
purer snow, fumbled it in their huge
hands, put their lips to it
like beasts, stared into the dark chalice
where the wine shone, felt it sharp
on their tongue, shivered as at a sin
remembered, and heard love cry
momentarily in their hearts’ manger.
They rose and went back to their poor
holdings, naked in the bleak light
of December. Their horizon contracted
to the one small, stone-riddled field
with its tree, where the weather was nailing
the appalled body that had asked to be born.