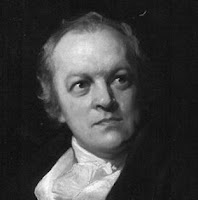 William Blake (1759—1827) is a London poet, and artist — often categorized with the English romantic poets, even though he was such a unique figure. During his lifetime he did not receive the recognition of Wordsworth and Coleridge, and he spent most of his life in London rather than the idyllic Lake District.

He spoke out against injustice. In such poems as “London” and “The Chimney Sweeper” from his Songs of Innocence and of Experience (1794) he shone a light on the plight of the poor climbing boys. He was critical of both church and state whose self-interest encouraged this exploitation. A Christian politician, Lord Shaftesbury, did much to end this practice through laws limiting child labour (1833) and finally the Chimney Sweepers Act (1875). Blake’s poetry was a voice crying in this wilderness.

Blake was very clearly a Christian, as expressed in his own writing, but he also believed he received visions right from the time he was a child. He said that many of his poems and images were inspired by angelic messengers.

You don't believe — I won't attempt to make ye, and that
You are asleep — I won't attempt to wake ye.
Sleep on! sleep on! while in your pleasant dreams
Of Reason you may drink of Life's clear streams.
Reason and Newton, they are quite two things;
For so the swallow and the sparrow sings.

Reason says `Miracle': Newton says `Doubt.'
Aye! that's the way to make all Nature out.
`Doubt, doubt, and don't believe without experiment':
That is the very thing that Jesus meant,
When He said `Only believe! believe and try!
Try, try, and never mind the reason why!'