Diane Tucker is a Vancouver poet. She has three full-length poetry collections: God on His Haunches (Nightwood Editions, 1996), Bright Scarves of Hours (Palimpsest, 2007) and Bonsai Love (Harbour Publishing, 2014). She has also published a YA novel, His Sweet Favour (Thistledown, 2009). In 2013 her first stage play, Here Breaks the Heart: The Loves of Christina Rossetti, was produced by Fire Exit Theatre in Calgary.

She is one of the poet-organizers of Vancouver’s Dead Poets Reading Series — literally presenting the work of poets that are no longer around to read their own work.

God on his haunches

such an appalling picture
God on his haunches
like a bird watcher, waiting
for what he knows must happen
but will for the world neither impede nor hurry on
waiting for the crunch of the beak through the egg
waiting for the infusion of blue through the bud
God the time-lapse photographer

such a terrifying picture
that the Timeless One should savour time
should know the necessity of every second
should want to plunge me
into the deeps of every moment
drown me in the glory of that which has been made
raise me, sodden, into uncreated light
gleaming in the sun like a dolphin's back

a barbed baptism, the eternal end
reached only through fiery lungfuls of time
every second clotting the nostrils
each moment a coal ablaze in the throat 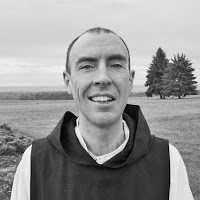 Cyrillona is a Christian poet of the 4th century AD who wrote in the Syriac language. He is a younger contemporary of Ephrem the Syrian (Ephrem of Edessa), and was perhaps his nephew. Although only five of his poems survive, it is of significance to have anything from him at all. He probably lived in Syria or Mesopotamia. Since the custom of the day was to deliver sermons in verse form, Cyrillona would have been seen more as a pastor by his contemporaries.

The above image is from a Cyrillona manuscript, housed in the British Museum.

The following translation is from Carl Griffin who has said, “Cyrillona’s work is important not only as a rare witness to early Syriac theology, biblical exegesis, and homiletics, but also as an example of the high artistry that Syriac poetry attained in its early, golden age.”

On the Washing of the Feet

[Jesus] came to Simon, and (Simon) was pricked in his heart.
-----He arose before him and asked him:
“The feet of the watchers, out of fear,
-----are covered in heaven lest they be burned,
and you have come to take in your hand, my Lord,
-----the feet of Simon, and to serve me?
All of this you have made manifest to us,
-----your humility as well as your love.
In all of this you have honored us;
-----do not alarm us again now, my Lord.
The seraphim have never even touched the hem of your garment,
-----and see how you wash the feet of lowly men!
You, my Lord, are washing my feet for me—
-----Who may hear of it and not be pricked?
You, my Lord, are washing my feet for me—
-----What land is able to bear it?
This report of what you have done
-----will strike awe in all creation.
This news of what has happened on earth
-----will strike terror into the assemblies of heaven.
Depart, my Lord, leave, for I shall not permit this!
-----I worship you, for I am a debtor.
On the surface of the sea I walked at your order
-----and at your command I traversed the waves,
and was not this first thing enough for me?
-----This latter thing which you endow me with, even greater—
It’s not possible, my Lord, that this should happen!
-----The report of it alone strikes terror in creation.
It’s not possible, my Lord, that this should happen!
-----For it is a great burden beyond measure.”

Robert Browning (1812—1889) is as much celebrated for his romance with poet Elizabeth Barrett Browning as he is for his poetry. His first published book Pauline: A Fragment of a Confession was denounced by John Stuart Mill as being dominated by the poet’s personal emotions and self-consciousness; this critique may be responsible for Browning subsequently veiling himself from his readers in his dramatic monologues.

He was raised in an evangelical home, but briefly became an atheist after having immersed himself in the work of Percy Bysshe Shelley. This was short-lived, however, and after his marriage to Elizabeth Barrett Browning his Christian faith grew steadily deeper — although, like much of his private life, was not declared in a personal way in his poetry.

His extensive piece Christmas-Eve and Easter-Day is an examination of different attitudes towards Christianity, and is one of his most significant contributions from his married years (1846 to 1861). Robert and Elizabeth lived primarily in Florence. Her grave is in the English Cemetery there, and his is in Westminster Abbey.

Earth breaks up, time drops away,
In flows heaven, with its new day
Of endless life, when He who trod,
Very man and very God,
This earth in weakness, shame and pain,
Dying the death whose signs remain
Up yonder on the accursed tree,—
Shall come again, no more to be
Of captivity the thrall,
But the one God, All in all,
King of kings, Lord of lords,
As His servant John received the words,
“I died, and live for evermore!”