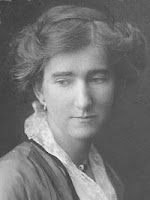 Ursula Bethell (1874—1945) has been described as “the most firmly, traditionally Christian” of New Zealand's poets. She was born in England, but moved to New Zealand as a small child; she was educated in England and Switzerland — later continuing to travel extensively, including living for awhile in Geneva to study painting.

Her poetry often reflects her interest in painting and her love of gardening. She writes of the beauty of creation, often avoiding overtly Christian language. In her poem “Warning in Winter” she uses the term “The Spirit of Beauty”. In a letter she said, “Some people haven't liked [the term] 'The Spirit of Beauty' but surely it's true — The Holy Spirit must be the Spirit of Beauty”.

She had long been a supporter of the role of women in the church, and in 1935 donated her home as accomodation for an Anglican deaconess training institute.

The following is one section of a longer poem from her collection Day And Night (1939).

From At the Lighting of the Lamps (For Music)

Praise, praise to thee, Almighty Artificer, Architect,
Poet, whose pure inexhaustible spring eternally flows,
Artist, whose marvellous works eternally are made manifest,
Eternally making, in making, eternally finding repose.
Praise to the All; the One; Ineffable; and Intimate;
Calling thy stars, thy souls, thy least electrons by name;
For thine, as ours, the human heart that beat upon Olivet
Under these same stars, and thine the unquenchable flame
Of love in that heart.… The city lights of Jerusalem
Burned low.… beloved, pitiless city of light
Put out, put out; but in pity, on high to be lit again,
For the price of the heart broken, the life put out for a night,
But mightily rising, rising again, and prevailing mightily.…
Light of lights, Lamp of the City, Orient blaze
Of glorious splendour, on us shed forth thy golden rays!
In thy light our lights are consumed, and yet not utterly,
Night after night, in peace, amen, we hymn thy praise.

His literary influences come from a variety of sources. He’s eager to praise the work of such renaissance poets as Milton, Spenser, Shakespeare and Marlowe — but then again if you were to speak of such mid-century voices as Charles Williams, Owen Barfield and C.S. Lewis (Foster is Poetry Editor at the Lewis-inspired journal Sehnsucht) he’d engage you in a lively discussion. Similarly he is an enthusiast of diverse contemporary poets including Seamus Heaney and Richard Wilbur. Foster’s academic love of literature shows itself strongly in his own verse; his work as a literary critic also reflects his wide interests.

Devotion: For Our Bodies

Yes, Love, I must confess I’m at it again,
struggling in vain with my Greek declensions.
I know it’s common, but I want to show
you what I found in Praxeis Apostolon,

chapter one, verse twenty-four: this exquisite
epithet, kardiognosta. Forget
briefly its context, that the Eleven,
genuflecting, implore the Lord to give

wisdom. Between Justus and Matthias,
who replaces Judas? Let this word pass
to private sharpness toward love’s dominion.
Let me kiss it across your collarbones—

knower of hearts. Its sweetness fills my mouth
and our twin lots, as if they’d chosen both.

Read my Ruminate review of The Garbage Eater here.

Alan Paton (1903–1988) is a South African writer who saw himself as a poet who wrote novels. He is best known for Cry The Beloved Country (1948). It is the story of a Zulu pastor's search for his missing son, in a land where racial injustice had become the norm.

As the principal of Diepkloof Reformatory for young black offenders, from 1935 to 1949, Alan Paton was able to introduce significant reforms – enabling inmates, who had proven themselves responsible, freedom to work and often live away from the reformatory. He was so opposed to his country's apartheid policy, that in 1953 he founded the Liberal Party of South Africa.

The international success of Cry The Beloved Country, kept him financially independent and protected him from government prosecution, although his passport was confiscated in 1960 for about ten years. The following poems are from his collected poems, Songs of Africa.

My Lord has a great attraction...

My Lord has a great attraction for the humble and simple,
they delight in his conversation,

The insane stop their frenzies and look at him unsurely,
then they crowd round him and finger him gently,

Their wistful eyes capture something that was lost, they
are healed for a moment of the hurts of great institutions.

The half-witted press their simple thoughts upon him, and
he listens with attention to the babbling of imbeciles.

He knows their meanings, and they observe him trustfully.

He passes through the great gates of Alcatraz, and there is
no searching machine that can prevent him,

He goes into the cells that have the iron doors, where the
wild men are shut in completely,

They put their wild teeth on his hands, but take them away
again from his wounds with wonder.

Oh Lord teach us your wisdom, and incline our hearts to
receive your instructions.

Then the maniac would stay his hands from the small girl,
and the drunken man from the throat of the woman,

And the father from the growing son, and the son
his hands from the father.

And the wild boys could be brought out from the cages, and
the wild men from behind the unutterable doors.

No Place for Adoration

I saw the famous gust of wind in Eloff Street
It came without notice, shaking the blinds and awnings
Ten thousand people backed to the wall to let it pass
And all Johannesburg was awed and silent,
Save for an old prostitute woman, her body long past pleasure
Who ran into the halted traffic, holding up hands to heaven
And crying my Lord and my God, so the whole city laughed
This being no place for adoration.

George MacDonald (1824–1905) is a Scottish writer best known as a novelist, but he also wrote in such genres as poetry, sermons, and literary criticism. He was a Congregational minister, who mentored the young Lewis Carroll, encouraging him to publish his stories of Alice which were popular with MacDonald’s many children.

His greatest influence is as a writer of fantasy — both for children (he would say “for the child-like”) and for adults. His best children’s books are The Princess and the Goblin (1872) [read my brief review here] and its sequel The Princess and Curdie (1882). His masterpieces of adult fantasy are Phantastes and Lilith — both published in 1895.

MacDonald greatly influenced many authors, including G.K. Chesterton and C.S. Lewis. Lewis referred to him as his master, and said, “...what I learned to love in Phantastes was goodness.” This quality comes through in MacDonald’s other works as well, which W.H. Auden confirms.

When thou turn’st away from ill,
Christ is this side of thy hill.

When thou turnest toward good,
Christ is walking in thy wood.

When thy heart says, “Father, pardon!”
Then the Lord is in thy garden.

When stern Duty wakes to watch,
Then his hand is on the latch.

But when Hope thy song doth rouse,
Then the Lord is in the house.

When to love is all thy wit,
Christ doth at thy table sit.

When God’s will is thy heart’s pole,
Then is Christ thy very soul.