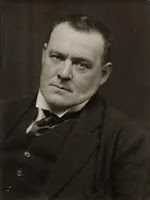 Hilaire Belloc (1870—1953) is a writer of light verse who, although he was born in France and served briefly in the French military, spent his life in Britain. His family moved to England when he was just two years old, he attended Balliol College in Oxford, and by 1906 was elected to the British House of Commons.

He was a prolific writer of fiction, history, biography, and religion, but is best known today for his poetry. Although he wrote humorous rhymes, there was often a seriousness to be found within, such as in the following brief poem.

Of three in One and One in three
My narrow mind would doubting be
Till Beauty, Grace and Kindness met
And all at once were Juliet.

Belloc is author of two books of poetry, Verses and Sonnets, and A Bad Child's Book of Beasts, both published in 1896 — the latter of which satirized moralistic poetry for children. He was a very devout Catholic and influenced his good friend G.K. Chesterton to convert.

Of Courtesy, it is much less
Than Courage of Heart or Holiness,
Yet in my Walks it seems to me
That the Grace of God is in Courtesy.

On Monks I did in Storrington fall,
They took me straight into their Hall;
I saw Three Pictures on a wall,
And Courtesy was in them all.

The first the Annunciation;
The second the Visitation;
The third the Consolation,
Of God that was Our Lady's Son.

The first was of St. Gabriel;
On Wings a-flame from Heaven he fell;
And as he went upon one knee
He shone with Heavenly Courtesy.

Our Lady out of Nazareth rode —
It was Her month of heavy load;
Yet was her face both great and kind,
For Courtesy was in Her Mind.

The third it was our Little Lord,
Whom all the Kings in arms adored;
He was so small you could not see
His large intent of Courtesy.

Our Lord, that was Our Lady's Son,
Go bless you, People, one by one;
My Rhyme is written, my work is done.