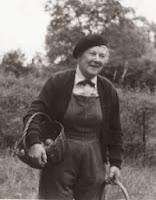 Ruth Pitter (1897—1992) is a British poet, who published a total of eighteen poetry collections. For her book, First Poems (1920), she received help and encouragement from Hilaire Belloc. A Trophy of Arms earned her the 1937 Hawthornden Prize, and in 1955 she received the Queen's Gold Medal for Poetry. After WWII she was a frequent guest on BBC Radio, and in the late fifties was a regular on the early television talk show The Brains Trust.

In a letter, she once wrote:
------"As to my faith, I owe it to C. S. Lewis. For much of my
------life I lived more or less as a Bohemian, but when the
------second war broke out, Lewis broadcast several times,
------and also published some little books (notably The
------Screwtape Letters), and I was fairly hooked. I came to
------know him personally, and he came here several times.
------Lewis's stories, so very entertaining but always about
------the war between good and evil, became a permanent part
------of my mental and spiritual equipment."
She and C.S. Lewis became close friends, and he became a great admirer of her poetry.

O Come Out of the Lily

O come out of the lily to me,
Come out of the morning-glory's bell,
Out of the rose and the peony,
You that made them, made so well
Leaf and flower and the spiral shell,
And the weed that waves in coves of the sea.

O look out of the ermine's eye,
And look down with the eye of the bird,
And ride the air with the butterfly
Whose wings are written with many a word,
Read and beloved but never heard,
The secret message, the silent cry.

O leap out of another's mind,
Come from the toils of the terrible brain:
Sleep no longer, nor lurk behind
Hate and anger and woeful pain:
As once in the garden, walk again,
Centre and spirit of human kind.