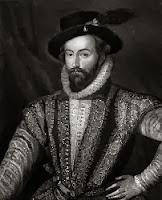 Sir Walter Raleigh (1554—1618) is a British explorer, soldier and poet. As a patron of the arts, he supported Edmund Spenser as he was writing The Faerie Queen. Much of Raleigh's own poetic output, though, was destroyed.

In 1578 he sailed to America, and by 1585 sponsored the first English colony there. He is credited with bringing both potatoes and tobacco back to Britain, and establishing the fashion for smoking at court. He was a favourite of Queen Elizabeth I, who knighted him, and had him appointed captain of the Queen's Guard. In 1592, however, she discovered he had secretly married one of her ladies in waiting. She had them both imprisoned, for a time, in the Tower of London.

Of his own life he said, "I have lived a sinful life, in all sinful callings; for I have been a soldier, a captain, a sea-captain, and a courtier, which are all places of wickedness and vice." He also expressed, "we have all remained in the shadow of death till it pleased Christ to climb the tree of the cross for our enlightening and redemption."

During the reign of James I, he was charged with treason, and was incarcerated in the Tower of London for another twelve years. By 1616 he was released. The next time Raleigh was imprisoned, however, the king had him beheaded. The following poem is said to have been written by Raleigh the night before his execution, and in anticipation of it.

Even such is Time, which takes in trust
Our youth, our joys, and all we have,
And pays us but with age and dust,
Who in the dark and silent grave,
When we have wandered all our ways,
Shuts up the story of our days.
But from which earth and grave and dust
The Lord shall raise me up, I trust.