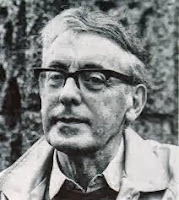 Charles Causley (1917—2003) is a Cornish poet who, even after gaining international attention, would rarely leave his hometown of Launceston. Although he previously had had slim poetry volumes, such as Farewell Aggie Weston (1951), published, his reputation became established in 1957 with the appearance of Union Street — which included an enthusiastic introduction by Edith Sitwell. In 1967 he received the Queen's Gold Medal for Poetry, and in 1986 he was presented a CBE (Commander of the Most Excellent Order of the British Empire). In the 1970s, he also began publishing collections of poetry for children.

He was a very private man, and yet had friendships with such poets as Jack Clemo and Ted Hughes. Hughes once said, " Among the English poetry of the last half century, Charles Causley's could well turn out to be the best loved and most needed."

Dana Gioia has called, Charles Causley "a Christian poet in an agnostic age", and notes that the following poem, in which Christ is speaking from the cross, was "inspired by a seventeenth-century Norman crucifix".

I Am the Great Sun

I am your life, but if you will not name me,
Seal up your soul with tears, and never blame me.