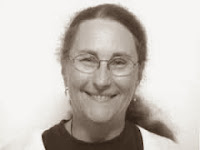 Evangeline Paterson (1928—2000) is the founding editor of the journal Other Voices. She grew up in Dublin, married an Englishman, and lived for many years in St. Andrews, Scotland, then in Leicester, England.

She is the author of several poetry collections including, A Game of Soldiers, Lucifer at the Fair and What To Do With Your Poems. Her New and Selected poems, entitled Lucifer, with Angels (Dedalus) appeared in 1994. I first encountered her work in The Lion Book of Christian Poetry (1981) which was reproduced by Eerdmans in the United States.

Death on a Crossing

What he never thought to consider was whether
the thing was true. What bewildered him, mostly,
was the way that the rumours had of reaching him
from such improbable sources — illiterate pamphlets
pressed in his hand, the brash or the floundering stranger
who came to his door, the proclamations, among
so many others, on hoardings