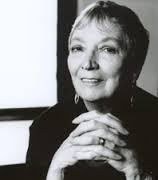 Madeleine L'Engle (1918—2007) was born and raised in New York City, although during her teen years she lived in the Swiss Alps and in Charleston, South Carolina. She met her husband, Hugh Franklin, when she was living in Greenwich Village and working in theatre. They were married in 1946, and he died in 1986. She was librarian at the Cathedral Church of St. John the Divine in New York for more than thirty years.

She is best known for her Newbery Medal winning novel A Wrinkle in Time (1963) and its sequels. In her poems, L'Engle primarily uses traditional structures. Her highly-quotable Walking on Water: Reflections on Faith and Art was first published in 1980. Her new and collected poems, The Ordering of Love (Shaw), appeared in 2005.

The following poem appeared in the Christmas collection Winter Song (1996) — which is a collaboration between Madeleine L'Engle and Luci Shaw.

Into the Darkest Hour

It was a time like this,
War & tumult of war,
a horror in the air.
Hungry yawned the abyss —
and yet there came the star
and the child most wonderfully there.

It was time like this
of fear & lust for power,
license & greed and blight —
and yet the Prince of bliss
came into the darkest hour
in quiet & silent light.

And in a time like this
how celebrate his birth
when all things fall apart?
Ah! wonderful it is
with no room on the earth
the stable is our heart.