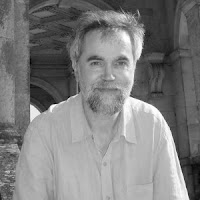 Roger Wagner is primarily known as a painter, however he also writes poems. His Fire Sonnets is a collection of poetry that is accompanied by his own wood cuts. He is also in the process of producing five illustrated books of his own translations of the Psalms; the first three volumes of The Book of Praises are available on his website.

His paintings appear in collections around the world, including the Ashmolean Museum in Oxford. In 2014 he painted the first portrait of the new Archbishop of Canterbury, which is housed in Auckland Castle.

The following poem shares its name with one of his most famous paintings (1989, Oil on canvas 154.8x188cm), which is part of a private collection. Composer J.A.C. Redford has also set two of Roger Wagner's sonnets to music, including this one, in a piece entitled "I Saw The Cherubim".

I saw the cherubim one summer’s night
Reaping it seemed a ﬁeld of endless wheat.
I heard their voices through the fading light
Wild, strange and yet intolerably sweet.
The hour such beauty ﬁrst was born on earth
The dawn of judgment had that hour begun
For some would not endure love’s second birth
Preferring their own darkness to that sun.
And still love’s sun must rise upon our night
For nothing can be hidden from its heat;
And in that summer evening’s fading light
I saw his angels gather in the wheat:
Like beaten gold their beauty smote the air
And tongues of ﬂame were streaming in their hair. 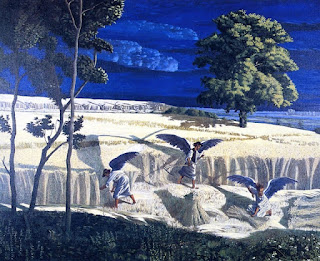