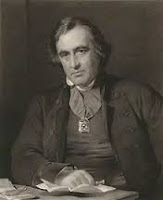 R.C. Trench (1807—1886) is a former Archbishop, a philologist and a poet. He was born in Dublin, and graduated from Trinity College, Cambridge. His first collection The Story of Justin Martyr and Other Poems was favourably received in 1835. This and his other early collections demonstrated the influence of Wordsworth upon his writing. His 1851 book The Study of Words established his reputation as a philologist. He was also influential in the eventual development of the Oxford English Dictionary.

In 1856 Trench became the Dean of Westminster Abbey, and in 1864 the Archbishop of Dublin. His grave is in the central nave of Westminster Abbey where a plaque in Latin declares:
----"In memory of Richard Chenevix Trench, Dean of this church for
----7 years, Archbishop of Dublin for 21 years, who, captivated by
----the love of eternal truth in Christ, sang of its most holy
----beauty in his poetry and illuminated it in his expositions, and,
----in times of joy, in times of trouble, living and dying, he
----devoted himself to it with a singular and unimpaired
----faithfulness. His family erected this monument in thankfulness
----to God. He died in the year of salvation 1886, aged 78".

Spent in Thy presence will prevail to make —
What heavy burdens from our bosoms take,
What parchèd grounds refresh, as with a shower!
We kneel, and all around us seems to lower;
We rise, and all, the distant and the near,
Stands forth in sunny outline, brave and clear;
We kneel how weak, we rise how full of power!
Why, therefore, should we do ourselves this wrong,
Or others — that we are not always strong;
That we are ever overborne with care;
That we should ever weak or heartless be,
Anxious or troubled, when with us is prayer,
And joy, and strength, and courage, are with Thee?