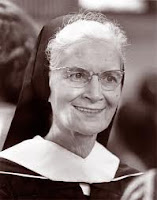 Maura Eichner (1915—2009) grew up in New York City where she was educated by the School Sisters of Notre Dame, whose order she joined at age eighteen. From 1943 to 1993 she taught in the English department of Notre Dame of Maryland University in Baltimore. After her death the many tributes to Sister Maura painted her equally as being a beloved teacher, as well as a talented poet.

The first of the eight poetry collections she published in her lifetime, Initiate the Heart, appeared in 1946. In 2011, her selected poems After Silence became available.

Sister Maura Eichner once said in a New York Times interview, that a poet needs to write "with the humility of a craftsman and the ardor of a saint" and to be "flaming with the good tidings of the Incarnation."

What My Teachers Taught Me
I Try To Teach My Students

A bird in the hand
is not to be desired.
In writing, nothing
is too much trouble.
Culture is nourished, not
by fact, but by myth.
Continually think of those
who were truly great
who in their lives fought
for life, who wore
at their hearts, the fire’s
center. Feel the meanings
the words hide. Make routine
a stimulus. Remember
it can cease. Forge
hosannahs from doubt.
Hammer on doors with the heart.
All occasions invite God’s
mercies and all times
are his seasons.