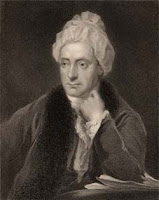 William Cowper (1731—1800) is celebrated as a poet and hymn writer. Samuel Taylor Coleridge called him "the best modern poet". Even though he was a significant influence on the romantics, and the author of many well-loved hymns, his life was troubled. When he was six years old his mother died, and he was sent away to a boarding school where he was neglected and bullied. Cowper struggled with mental illness throughout his life — both before and after he embraced Evangelicalism — experiencing four extreme bouts of depression during which he unsuccessfully attempted to take his own life.

Elizabeth Barrett Browning expresses well the paradox of Cowper's melancholy in her poem "Cowper's Grave", which begins, as follows, with struggle but concludes with a vision of hope.

One of the most important friendships in his life was with John Newton — the former slave ship captain and writer of "Amazing Grace". Newton encouraged Cowper in his faith, and in the writing of hymns. In 1779 the two published Olney Hymns, which included many famous songs. Cowper experienced what he called his "fatal dream" which caused him to feel, during his darkest days, that the truth he believed in God's plan of salvation applied to everyone but himself.

In 1782 his first poetry collection — Poems by William Cowper, of the Inner Temple — was published and very well received. Read John Piper's excellent reflection on the tragic life of William Cowper, here

God Moves In A Mysterious Way

God moves in a mysterious way
His wonders to perform;
He plants his footsteps in the sea,
And rides upon the storm.

Deep in unfathomable mines
Of never failing skill,
He treasures up his bright designs
And works his sovereign will.

Ye fearful saints, fresh courage take,
The clouds ye so much dread
Are big with mercy, and shall break
In blessings on your head.

Judge not the lord by feeble sense,
But trust him for his grace;
behind a frowning providence
He hides a smiling face.

His purpose will ripen fast,
Unfolding every hour;
the bud may have a bitter taste,
But sweet will be the flower.

Blind unbelief is sure to err,
And scan his work in vain:
God is his own interpreter,
And he will make it plain.