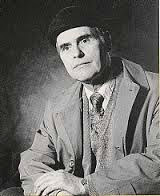 George Whipple (1927—2014), a well-respected Canadian poet, has died at age 87. His most-recent book is the third and final installment in a series of New and Selected Poems published by Penumbra Press: The Language Tree in Winter (2013). His first poetry collection Life Cycle appeared in 1984.

Whipple was born in St. John, New Brunswick, grew up in Toronto, and lived for the past 29 years in Burnaby, British Columbia. According to the Globe & Mail his papers and other works are archived in the Thomas Fisher Rare Book Library at the University of Toronto.

He sent me a hand-written card in 2009—never one to use e-mail—where he wrote, "Art is long, life is short." (God bless you, George.) The following poem is from his book The Colour of Memory.

One of my favourite churches
is Strathcona Gardens
with its long grape arbour nave,
its baptismal font an oval cistern where
water undulates the sky's
wind-rippled dome supported by
four stoic evergreens;
the censers a few lilac blooms
scenting the warm air with cool perfumes;
the lulling homily the buzz of bees,
my heart the altar, and my eyes
two shining windows gathering the light
reflected from rose bushes everywhere;
and in the choir loft of apple boughs
the last light evensonged of orisons of birds.