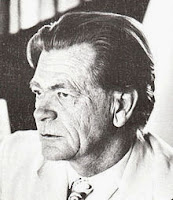 James McAuley (1917—1976) is an Australian poet, who was also known as a right-wing intellectual. Before he became known as a poet in his own right, he jointly concocted "The Ern Malley Hoax" (1944) with his friend Harold Stewart. Their idea was to expose what they considered to be shallowness in modernist poetry. McAuley and Stewart prepared poems in the modernist style "using partly random composition methods", and submitted them to the journal Angry Penguins, which quickly accepted and published them. Although the influence of modernism in Australian verse slowed in the aftermath of the hoax, ironically, interest in the Ern Malley poems continues to this day and even overshadows McAuley's own critical legacy.

McAuley's first collection Under Aldebaren appeared in 1946. By 1955 he was selected to be editor of the influential Australian journal Quadrant, and in 1961 he became Chair of English at the University of Tasmania. His Collected Poems (1971) was joint winner of the Grace Leven Prize.

That each thing is a word
Requiring us to speak it;
From the ant to the quasar,
From clouds to ocean floor—

The meaning not ours, but found
In the mind deeply submissive
To the grammar of existence,
The syntax of the real;

So that alien is changed
To human, thing into thinking:
For the world's bare tokens
We pay golden coin,

Stamped with the king's image;
And poems are prophecy
Of a new heaven and earth,
A rumour of resurrection.